LEGO’s small and always fun Racers sets are being refreshed for 2015! LEGO has announced the new ‘Speed Champions’ range, which is made up of partially refreshed old Racers sets (specifically the race-Ferraris and Iveco Transporter), and some new (and rather nice) hypercars.

One of these new sets is shown in the picture above – the awesome McLaren P1 – which joins the other two members of the latest real-world hypercar trio: the Ferrari LaFerrari and Porsche 918 Spyder. The P1 shown comes equipped with cones, a pleased-looking mini-figure driver and a few other useful tools, whilst the other sets also include a variety of additional parts.

We think the single car sets (Porsche 918, LaFerrari, P1, and a Ferrari 458 GT3) will please collectors although they do seem to show evidence of LEGO’s default method of creating the complicated shapes required via large specifically moulded new parts and stickers. Nevertheless, all of the new cars do look fun and some of those unique pieces might be usable for other ends (the surfboard piece in use as the McLaren’s rear spoiler is a nice touch!).

Overall we think the new Speed Champions cars will make good starter sets for beginners, and they’re relatively inexpensive at around €15 each. Definitely worth looking out for when they reach stores in early 2015. 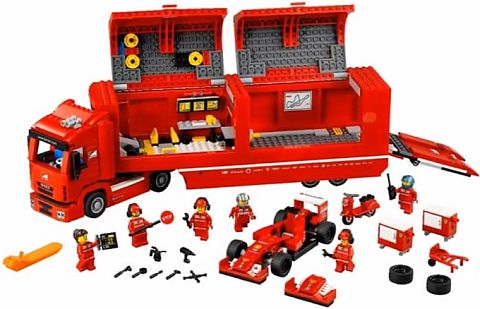 This is the set that the Elves are more interested in though. Remember set 8654? LEGO’s F1 team truck was well received by builders and LEGO have given it a refresh it for 2015 creating the new set 75913.

Included in the revised set are toolboxes with tools, lots of Ferrari-attired mini-figures, a brick separator(?), a Vespa(!) and of course the latest Ferrari F14, complete with a spare nosecone. The F14 seems a fairly accurate mini-figure scale version of Ferrari’s real racer, featuring a couple of new pieces and stickers to create the flowing shape.

As for the truck, LEGO seem to have reused the same Iveco cabin and trailer from last year’s set, and all of the assorted racing paraphernalia can fit inside as before. 75913 will cost you around €100, which is quite expensive for a mini-figure scale set, but there is a lot included for your money. 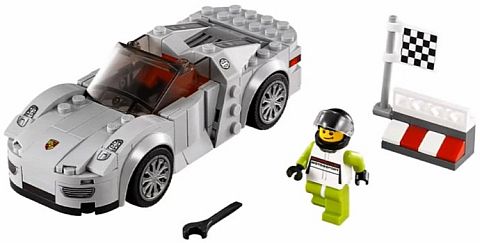 Joining 75913 in the new Speed Champions range for 2015 are a Mercedes McLaren pitbox with F1 car (€35), two Porsche GT3 Racers in one package (€50) and the other aforementioned supercars including the 75910 Porsche 918 Hybrid pictured above. The complete Speed Champions range will reach stores in early 2015. Start saving!