Welcome to the second in TLCB’s Pro Series;

How to Become a Lego Professional

In this series we’re interviewing builders who have taken their hobby to the next level, and who are now earning an income from their Lego building, either via a full time career, or via side projects such a commissioned creations or book publication. If you’re interested in a career working with Lego, these builders can help you, because they’ve made it happen…

The second Pro to join us here at TLCB is a man who has taken his Lego building right to the top, and you might even have one of his designs at home, set designer for The LEGO Group; Nathanael Kuipers aka NKubate…

Having worked for TLG as a designer – I can for example take credit for the 8674 F1 Ferrari, 8271 Wheel Loader, 8272 Snowmobile, 8292 Cherry Picker, and some Creator alternates, like the Truck in 4939, Hovercraft in 4997 and Skid Loader in 4993 – and being responsible for “The LEGO Build-It Books“, TLCB was interested in me writing an article about my experience on what it takes to become a LEGO “Pro “, or at least how to gain success as a LEGO builder.

I was certainly willing to help our younger generation of builders, but writing an interesting article was easier said than done. On the one hand it had to be motivational, but on the other hand I felt the need to address a few issues that show a more realistic picture and therefore I decided to take a slightly different approach that I hope will both inspire and challenge the readers…

So it seems the main question I hear a lot now is ‘How do I become a successful LEGO builder?’ Then we first need to define what successful means. In this time and age most will probably say that being successful means being popular, getting blogged on other sites, receiving a lot of likes and having many followers. Fame is what everyone is after. Well, if that’s the case then I think I’m not the right person to ask. Sure I have received quite a few likes on my work, I’ve been blogged a few times, and have some followers, but it’s dwarfed in comparison with that of many others.

The problem is that to get noticed by the majority of the fan community these days you almost have to come up with something extraordinary; building fantastic, high detailed dioramas (preferably in minifigure scale), oversized, completely remote controlled vehicles and of course IP related models or famous brands (like Star Wars, Harry Potter, Ferrari, Lord of the Rings or Transformers…). Fuse them all together and you almost have a guaranteed hit. Just look at my most popular creation, a Sideswipe Transformer Lamborghini Countach. Add unique and unusual building techniques, styles and colour schemes for maximum impact. 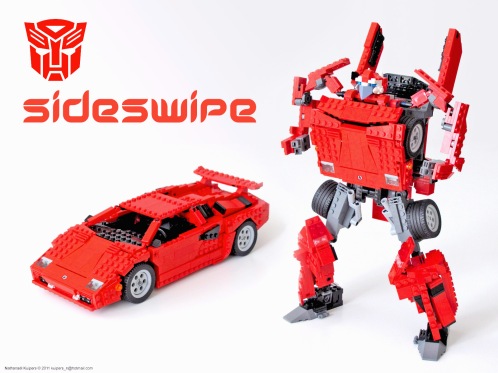 Basically you need to be a masterbuilder with a vast collection of bricks right from the start if you want recognition. Furthermore you need good photo and video editing skills to show off your models, because nowadays we are visually oriented junkies. So do not show too many studs in your models either, because generally speaking they are not appreciated. Even TLG is covering them more and more with smooth curves and tiles…

Oh, and of course you have to socialise a LOT, start praising other people their work, publicize your models on as many sites as possible and announce them on all kind of popular forums before you get liked and noticed in the first place. But overdo it and it works immediately against you, because you’re considered a nuisance, desperately seeking attention.

Then if somehow you finally manage to succeed because you met all the right criteria, and get your work noticed after all your efforts as a newcomer, you discover that your moment of fame doesn’t last very long. With an ever shortening attention span, the majority of people already has moved on and crave for the next big thing, raising the bar even a little higher. But at least you can then say that you had your moment of fame, right? Perhaps most people would be extremely satisfied with this, but certainly not me…

First let me say this, that I don’t like this whole “online social protocol” very much, and actually decided to stop with most social interaction on the Web, because it feels quite superficial to me. Furthermore I don’t think it is very fair that the community without perhaps realising expects pretty much miracles from newcomers but provides very little encouragement or concrete tips to help them gain confidence in their building skills. And to be fair TLG only does this too sparingly in my opinion, at least not as much as I would like to see.

What happened with the slogan: “What it is, is beautiful”, where we celebrate the creative process rather than the end result? With so much emphasis on the result, we undermine the process, the effort of trying, and importance of problem solving and creative thinking, skills that are crucial to overcome the many challenges we are facing today. (Consider for example the highly mixed reactions I received on my attempt to recreate the complex drivetrain of the Jeep Hurricane, which showed a lot of creative ideas but didn’t work so well in the end as anticipated.)

Sure, seeing all those fantastic finished creations can be pretty inspirational, but at the same time I can imagine very frustrating and discouraging for starters, because they wonder how they will ever reach a similar level when they have only so little experience and material to work with.

So when I started to get more aware of this unhealthy development my goal became to not only inspire, but also try to actively engage and encourage others to start building and be creative. Instead of aspiring to be successful by means of becoming one of the most popular builders, I’d rather be one of the most influential builders, having a lasting impact.

This meant that it was more important to make my models accessible for a wider public, rather than pleasing the core of the fancommunity. This resulted for example in the concept of building alternates, which does neither require mad skills nor tons of bricks to start with. Sure I don’t get that much recognition for my work, because it often looks too “mainstream”, but that’s exactly the intention here! And although most of my models might look pretty ordinary, there is more going on than meets the eye, just to trigger the creativity and imagination. People who actually have tried to replicate my models, can testify what I’m talking about here.

I can’t think of anything more rewarding than to receiving messages from people around the world who thank you personally for the fun challenges that revealed to them the potential of the system, encouraged them to explore and be creative, and as a result made them better and more confident builders/ problem solvers. My alternatives have engaged many to start building without prefabricated instructions, from pensioned math teachers to young adults with impairment.

“I’ve just finished rebuilding this model. I chose this, because I thought it would be easy. It didn’t looked like there could be too much hidden inside. Well, I was wrong… This model is way beyond building techniques known from official sets. It really broadened my mind. So to everybody: don’t ask for building instructions. Take the challenge! It’s possible and pretty much worth it.“

However the price to pay when people start copying your work is that someone will (eventually) try to benefit from it, especially since nowadays – as a result of the Internet – hardly anybody seems to know about and respect intellectual property rights anymore. Not even a credit or a reference to the original designer, let alone the question if it is ok with you in the first place. To overcome this situation you have to be on top of things all the time, always pushing the envelope.

This means that you need to be aware of what’s going on, but contrary to popular belief it certainly doesn’t mean that you should follow the flow or current trend! Instead I claim that one should try to explore unknown territory and set one’s own course to create new boundaries which I believe is essential for innovation and personal development. Surely this approach will once again not be the most popular route even causing frustrations at times, and requires a lot of dedication, perseverance and patience, because the majority of people only has eyes for what’s popular and ignore the rest. But the possibility of becoming a trendsetter, with influential and perhaps even ground breaking designs should outweigh the prospect of temporary fame in every way. (My current project for example is a supercar with a unique 6-speed vertical gearbox design with linkage system, which as far as I can tell has never been tried before…)

So my personal message is that it’s not what you build that is important, but the reason why you build. And that reason should be something beyond yourself, a higher goal. Only then in my opinion will you create the potential of becoming truly successful!

We couldn’t agree more with Nathanael. Interest in fame, likes and rigging comments – especially if they’re not genuine (we’re looking at you ‘Get Your Creations Noticed!‘) will never be a route to building happiness. As a Lego blog we’re perhaps guilty of perpetuating the problem, but the important thing is not whether your build is blogged, but that you enjoyed building it. Build because it makes you smile – it’s why we all picked up bricks the very first time!

A huge thank you to Nathanael for joining us. You can check out his website, which includes his range of set alternatives, by clicking here. You can also see his works on MOCpages, and his set alternative books via our friends at No Starch Press.

“One of the greatest things about this book is the sections on building techniques. It does a fantastic job of explaining some of the more advanced building techniques and how they can be used. We then see these techniques used and applied in the models. This is a great way to learn how to build more advanced models yourself. It can be very inspiring and you’ll find yourself wanting to build your own amazing vehicles and not just the ones from the book.”