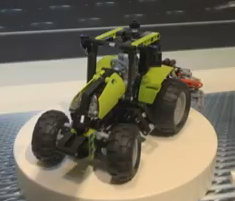 In the words of the late Etta James; At Last.

After a long search The Lego Car Blog Elves have scooped the final unrevealed Technic set of 2012. Alongside the previously revealed 9398 Rock Crawler and 9396 Rescue Helicopter, 9393 looks somewhat less impressive, due in most part to the fact it is, well, less impressive.

But that’s not to say it isn’t a good Technic set. 9393 is probably the smallest ‘proper’ Technic set to be released in 2012, holding that position jointly with the Quad Bike that’s already in shops (we can’t really say the mini-crane and mini-Unimog are proper Technic sets whatever The Lego Company labels the boxes).

Anyhow, this tractor looks a strong starter set, bringing back proper functionality after some shaky efforts over the past few years. It appears to feature hand-of-God steering and a working rear implement, presumably operating as a power take-off from the rear wheels. What we’re less keen on is the laziness of Lego’s designers, as this is the third green Technic tractor in about 5 years. Still, if it’s a popular format then we can understand Lego’s reluctance to break with a winning idea.

The 2012 Tractor will reach stores towards the end of Summer 2012 (or August if you’re reading this and wondering what the seasonal timings are at The Lego Car Blog Towers), and should be priced at about one third of the flagships’ RRP.