Welcome to The Lego Car Blog’s latest comparison of old and new Technic models; this time, excavators. Some genres of Technic model age better than others – a 1977 tractor is every bit as good as a 2012 one, and better than those in between – whereas others, I guess, just need a bigger parts palette to look and work right.

There’s a reason why excavator models were very rare from Lego until very recently, but it can be done with the old stuff. The blue machine in the picture above is built from instructions in the (completely wonderful) 8888 ideas book, published in 1980, and using only parts from that era. It’s movements are cunningly controlled using only racks and gears (lots of gears..) and it works OK, if not brilliantly. Cute, though. If it was a set from 1980, it would merit at least a 6/10.

Lego didn’t attempt an actual excavator set until the advent of pneumatics in 1984, with the 8851. 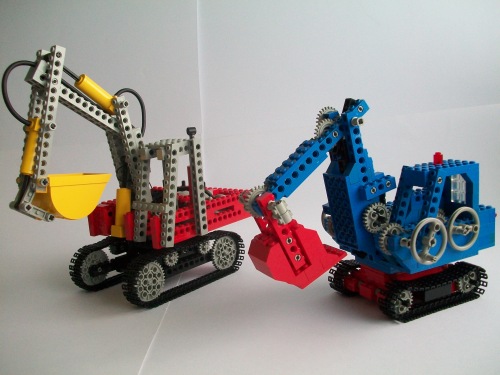 It’s the red beast on the left, and it looks like a step up from the blue one.

It isn’t. The problem was the early single-outlet pneumatic pumps. These extended under pressure, but returned via vacuum, controlled by a block of one way valves plumbed in between pumps and switches. This tortuous system had to be crammed in to 8851’s compact body, and unless you were VERY careful, there would be kinks in the pipework. (TLCB Top Tip: instead of using 8cm and 6cm grey tubes between the 3rd switch and the valve block, use 6cm and 4cm. They’ll be crushed a bit less.) It also made it that rare thing; a Technic model that’s not fun to build.

Not only that, but there is no task in all of Technicdom more fiddly than attaching this thing’s arm to the body. The problem here is a pair of elastic bands that need to be attached as well that prevent the arm from dropping as the pumps’ air pressure dissipates. I got one of these on, then gave up lest I throw the thing across the room in frustration. If any 1984 10 year old managed to assemble this completely correctly and get it to work first time, he is a genius.

A disappointed genius. After all that effort, he’d have had a machine that worked somewhat jerkily and wasn’t really capable of lifting very much. The first-gen pneumatics were too weak for all but the smallest models, in which it would have been difficult to fit all the pipework. If you build this now using the later double-acting pumps it is a lot better.

8851 does have one redeeming feature; the second model is a rather fine bulldozer with (lightweight!) lifting and tilting blade that works fine even with the early pumps and manages to be better looking than the main model. 5/10, and most of those points are for the second model…. Next!

On the left, 2010’s 8043 Motorized Excavator , previously reviewed in these pages and found to be magnificent; and on the right, the new 42006 Claw Grabber.

There have been others before these two, notably the 2008 8294, a fetching little red machine that made good use of linear actuators, and the back end of the 8862 backhoe with it’s three hissing two-stage pneumatic pumps, which worked beautifully.

8043 is recently retired, and now getting expensive, with good reason. It is utterly stupendous, and uses it’s motors, gearboxes and actuators to spectacular effect. The only slight annoyance is the size of the bucket – I’m sure Lego only put that in to give reviewers something to complain about… it earned an easy 10/10.

The new 42006 seems to be an attempt to broaden the appeal of the concept. As such, it’s smaller, skimpier, manually controlled and much cheaper (50 quid to you. Or 30 on the right day from Amazon – a bargain!). Unlike it’s big brother, it’s clearly built down to a price, but that price is so fair that I think the exercise was worth it. It’s a quick-ish, not too difficult build that isn’t full of the surprise-and-delight you get with an 8043, but nevertheless enjoyable.

The functions are all controlled using the same handwheel on the rear, with two gearboxes attached to switch between them. This does mean that you can, say, raise the arm and close the grabber simultaneously, which is nice…. The mechanism is sensibly geared as well. That grabber is more fun than a bucket. Drop it open into a pile of bits, and it will succeed in picking some of them up as it closes. The tiny actuator that controls it does feel very flimsy, though. I’m sure it isn’t, but I do question the thing’s likely longevity.

Linear Actuators are the making of the modern excavator. They have the strength, smoothness and precision that pneumatics lack and are perfectly suited to the task. However, I do think they take away some of the expertise required to understand how a thing works – you just clip them on, after all, and you don’t get to see what really makes your model tick. I hope there will always be a place for pneumatics on Technic models, despite their relative shortcomings. The builder has at least achieved something in getting them to work, after all.

All of the foregoing is a roundabout way of telling you that 42006 is a fine set. It’s not a substitute for 8043, but it’s certainly the second-best excavator, and I don’t mind the sacrifice of simpler, fewer functions and a skimpier appearance at this price point. It does what it needs to. 8/10

The Lego Technic excavator has (almost) never been in better shape. Get yours now!