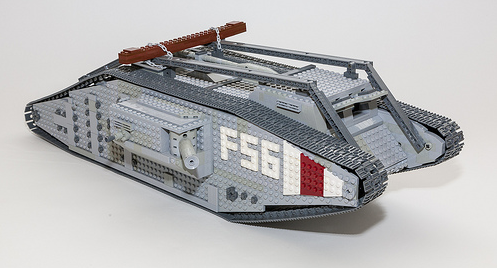 This strange-looking device was built by Jon & Catherine Stead on Flickr. It’s a British Mark IV Tank, one of the first operational, which saw service during World War I. Whilst tanks are an all too familiar sight in modern war footage, and even film from World War II, back in 1917 they were revolutionary, and – frankly – not something you would want to serve in. A top speed of 4mph, early automotive reliability and a tendency to get stuck in soft ground meant that they were easy targets once they fell behind the advancing front line. Germany even captured 40 in one battle alone and, somewhat bravely/foolishly, redeployed them as their own.

Despite the early problems the British invention was a formidable foe when used to attack enemy trenches, and as such it was developed rapidly after the war into ever more capable variants and has since been adopted by almost every army in the world.

See Jon and Catherine’s pioneering Mark IV on Flickr and, because as a community we often overlook why creations such as these are built at all, see what you can do to help those caught in conflict via the Red Cross.