After their adventures with the 31005 Construction Hauler and the 31006 Highway Speedster, we thought that the Elves would like to practice their nascent building skills on something a bit more challenging. The 7345 Transport Chopper’s RRP is double that of the previous two sets at £24.99 from Lego.com, though we bought our set for £20.00 from Amazon. Inside the box, you get 5 bags containing 383 pieces, which amounts to ½ kg or 18oz of LEGO. This compares very favourably with the price per kilo of bulk, unsorted LEGO on eBay. Being a Creator set, you’re also getting the months of design effort from LEGO’s team, plus printed instructions for three different models. Value for money? Excellent!

The first stage of building, as usual for the Elves, is to rip open the bags and send parts flying everywhere. Next comes the part where we fish bricks, plates, tyres and greebles out of the TLCB executive jacuzzi. The final stage is where assorted Elves batter each other with the larger and pointier components, until they are settled down with a blast from the air horn. You can understand why we haven’t let them build anything from Technic, with all of those spiky axles and cogs.

The three models are rated as “Quick”, “Medium” and “Advanced” builds. The helicopter is the “Advanced” build and seems to be completed in just 56 steps but there are several extra sub-builds within this, plus another 8 for the little red jeep. As usual, some of the steps only add a couple of bricks to the construction but we have to remember that the target age range is 8 to 12. We built the jeep first and gave it to the Elves to zoom around in, whilst we got on with the serious business of building the chopper. As this set is aimed at younger builders, it’s a bit annoying that you have to use parts from four different bags to complete the first three stages of building the jeep. Perhaps this sub-build could be in a separate bag and the rest of the parts could be in numbered bags, like some of the other LEGO product ranges? 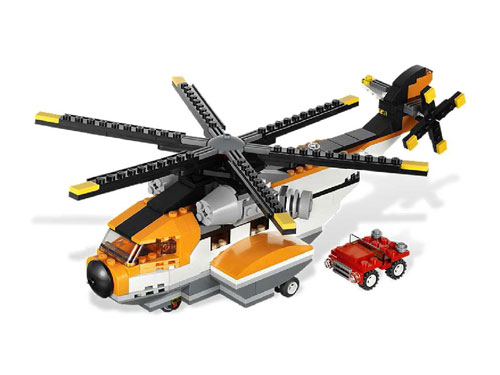 The first part of building the helicopter is its chassis, complete with retractable tricycle undercarriage. Strangely, the nose wheel is in a bag full of tyres but its tyre is in a different bag. Fortunately the Elves weren’t around to use their teeth to try to fit the wrong tyre. The legs of the landing gear fold down smoothly on Technic friction pegs and sit at a nice angle to give a stable base. When they are folded up into the fuselage, each leg has somewhere on it for a finger to hook into and easily fold it down. A sturdy, brick-built, studs-up cabin sits on the chassis, with curved sponsons for the main wheels.

There’s less SNOT work on this build than the other Creator sets that we’ve reviewed, with the engines being the main example. However, the windows behind the main windscreen are made from trans cheeses, attached to unusual trans-clear headlight bricks. The main rotor is sturdily anchored via two 2×2 tiles with Technic pins into a 1×3 Technic swing arm. The six-bladed main rotor and the tail rotor both spin fast and freely, though the heavy main rotor does wobble a bit. The finished build is 36 studs long by 12 wide. It is highly swooshable and fun to play with. It rolls across tables on its wheels well and the build quality is up to the odd impact with a skirting board or forced landing into the carpet. The Elves were soon planning missions for their HH-3F lookalike.

Moving on to the other builds; an incredibly useful addition to a set of this size, which wouldn’t add too much to the price, would be a brick separator. Perhaps LEGO assumes that if you’re building a big set like this one, you already own this vital tool? We had to prize some of the Elves off the helicopter, who were trying to prize off some bricks with their teeth. 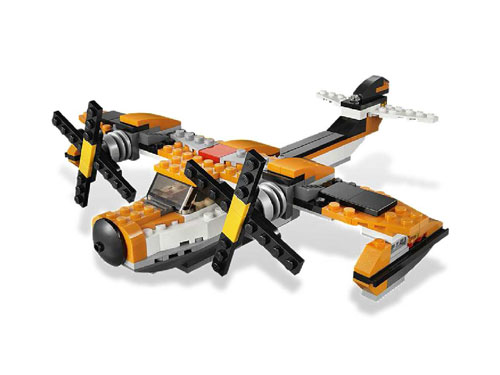 The seaplane is a nice, strong aircraft, with spinning propellers and fold-down wing-tip floats as working features. Possibly the more fun of the two alternatives is the car ferry. The first part of the build is a neat little 4×8 Humvee type truck. The ferry has a working tail ramp, twirly radar thingy and wheels hidden under its nose. These wheels enable it roll across a table or hard floor quite smoothly.

Some younger builders might be put off this set by its lack of mini-figures but, as we’ve mentioned in other reviews, they often have lots of mini-figures from other sets anyway. The builds don’t use any amazing techniques but are good examples of getting colour blocking and proportions right. The helicopter is a solid and playable build: a nice toy in its own right. There is also a good selection of basic bricks, plates and slopes, plus some more exotic pieces, which would be a super addition to any builder’s collection. Going back to the start of this review, this set is also good value for money. If the LEGO builder in your life wants a big box of LEGO, which will build some fun things and add well to their collection, this could be a good Christmas present to buy for them.