Not just an excuse for a slightly rude title, but a comparison of Technic fork lift trucks….

We’ll start with set 850, just as Technic itself did, way back when the summers were warm and everybody was on strike. In 1977, this was the very first ‘Expert Builder’ set. In common with the other early sets, there were instructions for 3 models and a wealth of further ideas on the box. The model itself is very cute, if somewhat basic. A quick build, it uses the limited palette of pieces then available to good effect. The first technic model is still the one with the best steering system, for instance. Exceptionally smooth in operation, sensibly geared and with a generous lock; a system that simply hasn’t been bettered since. Ally that to the very short wheelbase and you have an amazingly manoevreable model.

Moving frontwards, things are less happy. The forks are too long and too close together, they don’t rise very far and the system to move them is very basic. Tilting them is but the fevered dream of a madman… as for loading them – you’ll need to put something heavy under the seat first. So, 850 the model is probably a 5/10. 850 the set is more like a 9. There’s a perfect mix of bricks and the new technic parts here to make all kinds of yellow building site stuff. The perfect starter kit.

Moving on to 1984, and a demonstration that original style pneumatics can actually work, in the form of the slightly unhappy looking 8843. Maybe it should just be red or yellow, rather than both… This time at least, the forks will tilt, and there’s even an additional hand-of-god steering control to supplement the one in the cab, which (praise be!) is still connected. It’s rather a pity, therefore, that the steering feels very stiff, because the system incorporates 8 bevel gears (4 of which are in the roof!) and these are the older, flat 14 tooth gears which seem to have more friction than the newer design. It doesn’t help that the cab’s wheel rubs against some of the pneumatic tubing as it turns.

Whilst it does feel somewhat churlish to criticize a feature that I’m always begging to see brought back, this would actually be better without it. Don’t think for a moment that this will stop me nagging to see its return on new models…. capricious, moi?

At the front, things are better. The pneumatic installation is quite neat, there’s an extra long piston (not as illustrated; the one pictured is assembled from my collection, with period pneumatics from 8040) to facilitate a good range of movement, and the forks are linked to it via short lengths of chain. Operate the pump and they whizz up and down very happily, and will do so with a reasonable load, as well. To achieve this, millimetre perfect lining up of the chain is necessary – it uses tread link pieces wedged in holes and some of the clearances are very tight – but do that and it’ll work fine.

8843 is a good effort; in some ways a useful improvement on 850, but it’s lost that model’s best features – the B model here is a sketchy looking tow truck and the varied colour palette means there’s not enough pieces of one colour in this small set to make convincing alternatives. 6/10.

Fast forward to 1989; it’s goodbye Berlin Wall and, somewhat less momentously, hello 8835. Much better looking than its predecessor, it also benefits from a lifting mechanism that closely mirrors the solution on real forklifts. Smoother steering too, although wouldn’t it be nice if there was a wheel in the cab….? (yes, yes, I know…)

The only demerit with this model concerns the jerky movement of the forks. The brick-built carrier that wraps around the spars is too tight-fitting to move smoothly, as if the designers had forgotten the far more elegant solution to this problem found on 8843. At least they hadn’t forgotten about the tilt function.

Although 8835 is just as multi-coloured as its predecessor, the colours are much more harmonious and this is a handsome model. The B model suffers in the same way as 8843’s, though. It’s a less-than-convincing tractor. Stick to the forklift though and this is a good set, with only one major flaw. 8/10

Still with me? You’re doing well, don’t give up now… 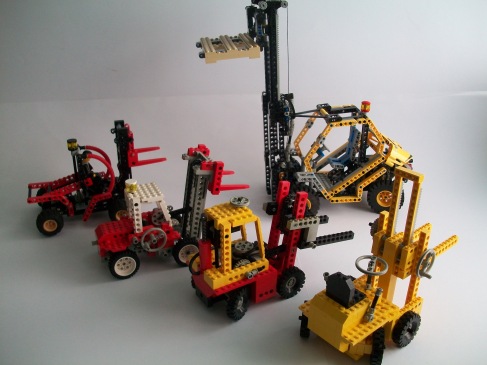 I give you, and you’re welcome to it, set 8248 from 1998. It’s very rare that I find a Lego model that I actively dislike, but this represents all that went wrong with Technic at the time. It’s an unfortunate looking mishmash of studded and studless parts that looks half finished. And not just because it’s the wrong colour – this is another build out of my collection. It actually looks better here than in the standard yellow and black. It doesn’t have the excuse of being smaller or cheaper either – piece count and price points are very similar to the others.

Why do I hate it? Until this point, successive Technic models had always aimed to improve on what went before. Success was by no means guaranteed, but the general trajectory was upwards (like the three earlier models…). On this… thing, as well as looking just plain awful, the forks don’t tilt, they are lifted by a ridiculous scissor mechanism (actuated – with some effort – by rotating a front mudguard!) that promptly flops down again unless it’s right at the top, and the wheel choice is inexplicable.

Ah! But it’s got a figure! Don’t get me started…. These ‘Technic guys’ were an unwelcome distraction that meant technic models suddenly had imposed on them a uniform scale that didn’t exist before. The emphasis shifted from innovative functionality to simply ferrying these fellows around. Although they were highly poseable, they were all one piece; so there was no swapping of legs / heads / torsos etc. That’s not LEGO, that’s an action figure.

Is there anything in this benighted model to give cause for hope? Well, the steering is nice and smooth, and the B model – a telehandler, I think – does look slightly better. Which fact does not save 8248 from being (with thanks to the Comic Book Guy) the Worst. Forklift. Ever. 2/10.

We move from a poor red model that should be yellow, to a good yellow one that should be red…. yes, it’s another build-up from my collection. Set 8416 from 2005, at which point Technic had fired the figures and turned the corner…

This is a much bigger set than the others with three times as many pieces, and they’re not all axles and pins…

Looks very butch, dontchathink? Even in dayglo yellow with too-small wheels… functionally, it only does one extra thing over 8843 and 8835, but that thing is pretty cool. The lifting control extends the boom while the forks are fired up it at twice the speed. Very swish, and it works flawlessly. Great as that is, it’s probably not enough to justify the vast increase in size and price over the others; the tilting control in particular is pretty basic. Now, if it was motorized….

As it is, 8416 is probably not functional enough for its price point, although the systems it does have do work well. Looks good too, with the right wheels. 7/10

The answer is, none of the above….

The forklift here is similar in size and systems to 8835, but it fixes that model’s only flaw by using Technic liftarms to wrap the fork carrier around the spars, thus affording it a bit of clearance and much smoother operation. It’s got a very four-square stance that gives excellent weight distribution, and with a simpler colour scheme it’s better looking. It should have those proprietary fork pieces as well, but I don’t have them in yellow. Yes, yet another build cobbled together from my collection…

It was well worth the cobbling, in this case. The lorry looks a tad sketchy, but there’s an excellent latching mechanism for the trailer hitch, it steers nicely, the trailer’s ramps fold down via the wheel on the side and there’s a lever to lock the parking feet in place. All very nice, and together these two vehicles make for an enjoyable build and an engaging playset.

With delicious irony, this is the right scale for those Technic figures LEGO used to do. You know the ones… All this and twelve Model Team wheels… can’t ask for more. 9/10.

…Although I could ask for a new Technic forklift model – something at about the size and price of the 9393 tractor – the Technic range shouldn’t be without one.