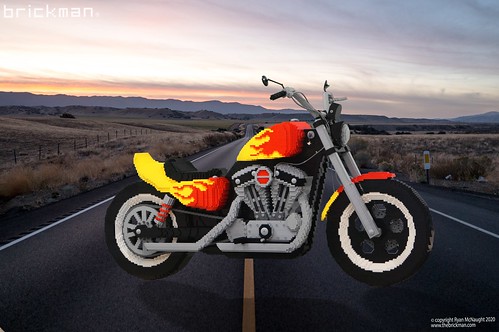 A film about a flaming motorcycle and little else, Ghost Rider is up there as one of the worst Nicholas Cage films in recent memory. And there are so many. Drive Angry, Outcast, Rage, Season of the Witch, Left Behind… they make us want to push his flaming motorcycle over in disgust at crimes against cinema. Fortunately that’s just what the contestants in the Lego Masters Australia TV show got to do with this incredible life-size motorbike by certified LEGO Professional Ryan McNaught and his team of builders.

Built from over 75,000 LEGO bricks, and with its hollow interior filled with loads more loose parts like some sort of brick-based piñata, the bike was smashed to provide pieces for an episode in the second season of the Australian version of the Lego Masters show entitled ‘Smash & Grab’. We suspect its destruction took a lot less than the 135 hours it took to build it, but that it made for great TV!

There’s more to see of Ryan’s life-size Lego motorbike on Flickr via the link above, and if you’re a German-speaking reader the Lego Masters show is looking for contestants for the German version right now! Click here to read about how to apply and maybe even score a TLCB Recommendation. For our non-German speaking readers (which will be most of you!), don’t worry – you can learn how to become a Lego professional via our aptly named ‘How to Become a Lego Professional’ series – click here to see how some of the bloggees here at TLCB  have done it!