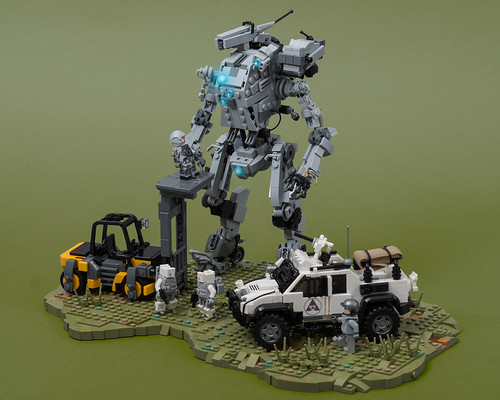 This is a Stryder Titan Class from the Titanfall game, and – frankly – that’s all we know, not having played it. But it does look seriously good. Built by Marius Herrmann there’s more to see of this mechanised monster at his photostream. Click the link above to make the jump.

The Second World War is endlessly glorified on TV, in video games, and in Lego. Whilst the reality was nothing glorious, it nevertheless captures the imagination of all of us who never served in the conflict, but who owe such an enormous debt to those who did.

TLCB veteran Kosmas Santosa is the latest a long line of builders to recreate scenes from the war years, however he reimagines things a little differently. Standing in the ruins of a nondescript wartime European village is a Titanfall mech, and never has a sci-fi build resided so comfortability in historical setting.

You can see more of Kosmas Santosa’s ‘Titanfall: World War II’ imagining on Flickr, and as we occasionally do here at TLCB, here’s a more important link that we’d like you to click if you have the time.