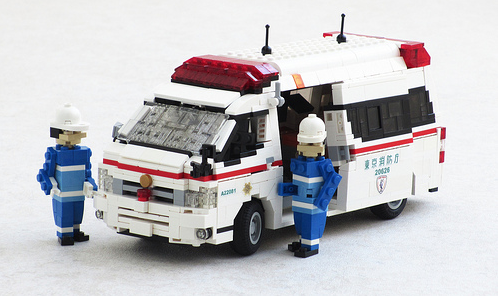 Chances are that if you’re reading this from (or have ever been to) Asia, then you’ve been in a Toyota HiAce. They are everywhere, performing every function it’s possible for a van to do. Hopefully though, you haven’t had to travel in this particular variant; the HiMedic Ambulance as used throughout Japan.

This superb Lego version of the Toyota emergency response vehicle comes from Ralph Savelsberg (aka Mad Physicist) of Flickr, who has not only recreated the outside of the HiMedic beautifully, there’s a fully-kitted interior behind the working sliding doors too.

There’s much more to see of Ralph’s Toyota HiMedic at his photostream via the link above, and you can read our interview with him as part of the Master MOCers series by clicking here.