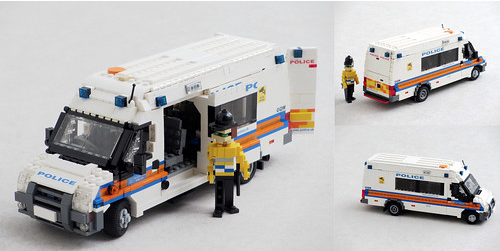 British police vehicles don’t wear the myriad of different liveries that feature across the United States. All feature the ‘battenberg’ chequered design, named after the famous Victorian cake that shares the same pattern, and it does look quite cool. Even on an embarrassingly unthreatening 1.6L Astra or Focus.

However until recently The Metropolitan Police (who look after the thirty-two London boroughs, counter-terrorism, and the Royal family) did have a distinct colour scheme, wearing a livery based upon a simple lunchtime snack rather than an English cake. We’re not sure why British police forces design their vehicles after party food, but we’re all for it.

Anyway, this previous-generation Metropolitan Police Ford Transit does wear the now-replaced Met Police ‘jam sandwich’ livery, which has been recreated rather wonderfully by regular bloggee Ralph Savelsberg aka Mad Physicist, complete with a British police officer (aka ‘Bobby’). Said officer is a little out of date now as British police don’t wear their ‘custodian helmets’ when driving, but they do still put them on to beat you with their baton, what with that being a special occasion.

There’s more to see of Ralph’s Metropolitan Police ‘jam sandwich’ Ford Transit on Flickr, and you can take a bite via the link above!