Before Batman returned to the dark and menacing character we know from 'Begins' and 'The Dark Knight' he was, well, a little camper. Hooray for progress!

The 1980’s Batmobile was a ridiculous thing – overblown, extravagant, and about as far from Batman’s character as you could get. But despite this, it’s still cool when found lurking in the Batcave. Outer Rim Emperor has recreated the famous hide-out down the last detail, including a dinosaur (although I must have missed that bit of the story!). Check it out on MOCpages or Flickr. 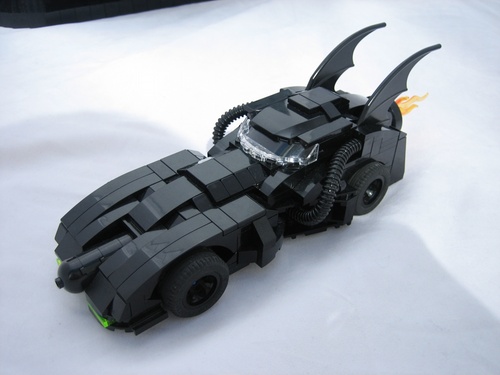 Remove Robin for twice the awesome

Over to Flickr now, where master car builder Lino M has designed Batman’s ride for 2025. It looks like we’re heading for a bit of a time-loop as it’s seriously retro in appearance, but that’s definitely a good thing. What’s not so good is it seems as though Robin, the Scrappy-Doo of the franchise, is making a comeback.