We’re only at the mid-way break in the 2018 Formula 1 season and it’s already more interesting than the last few seasons put together (which still isn’t that interesting, but it’s a start). The arrival of the ‘halo’ and slightly laxer penalties (thankfully) were the only changes versus 2017, but such consistency allows teams to make progress, and gosh was that needed. 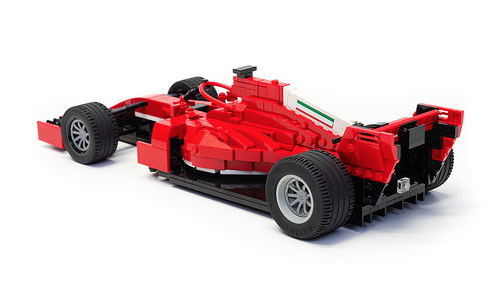 Years of Mercedes-AMG domination has, maybe, come to an end, as Scuderia Ferrari have at last got their act together and turned out a car that’s really quite good. Sadly Sergio Marchionne, Ferrari’s chairman, died this summer aged just 66, but what better way to celebrate his work than with a Championship win.

This is the car that Scuderia Ferrari and the whole of Italy hope will be able to take the Constructor’s Championship away from Mercedes-Benz, the SF71H. Powered by a 1.6 litre V6 with both an electrically driven turbocharger and an energy recovery system (as per the regulations) the SF71H produces arguably the most power of any engine on the current grid, allowing Sebastian Vettel to take four victories so far.

This stunning recreation of Ferrari’s 2018 title contender comes from previous bloggee Noah_L (aka Lego Builders) who, like the real teams competing in Formula 1, has heavily updated his 2017 car to meet the 2018 regulations. Modern Formula 1 aero is a mighty difficult thing to recreate in any form, let alone Lego, but Noah has done a superb job replicating the Ferrari’s incredible bodywork.

There are loads more images available to view the ingenious methods Noah has used to construct his model at his Flickr photostream and on MOCpages – click the links to take a look at how it’s done!