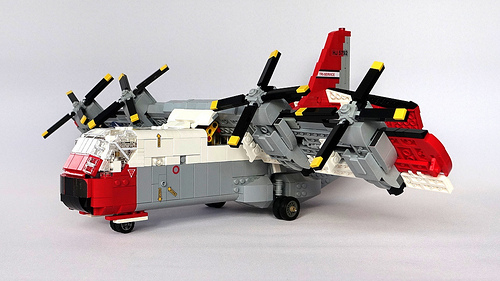 From one weird aircraft to another today, only this one was real (sort of). Built in the 1960s, the Ling-Temco-Vought (LTV) XC-142 was an experimental tilt-rotor vertical take-off/landing aircraft, and it really did look as odd as it does here.

It worked too, with five prototypes performing successful test flights in the mid-1960s. However with four 2,850bhp engines the XC-142 probably wasn’t a particularly fuel efficient way to transport 4,000kgs of military stuff, and thus the project didn’t prove financially viable, being shelved in 1966.

Today just one prototype XC-142 survives, but Henrik Jensen has added another with his rather excellent recreation of the tilting oddity. There’s more to see at Henrik’s Flickr photostream and on MOCpages – click the links to tilt the table.