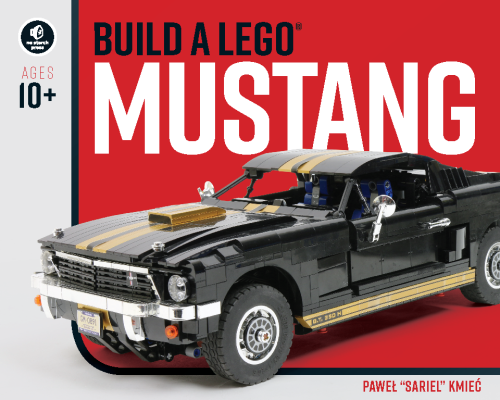 Lego-building legend Sariel has appeared here multiple times over the years. He’s part our our ‘Become a Pro‘ series, is the author of some excellent Lego books, and his beautiful fully remote controlled Mustang GT350 is one of the the finest models we’ve ever published.

Today we’re privileged to share a piece of work that combines all three of the areas above, as the awesome guys at No Starch Press sent us a copy of their new book written by Sariel; ‘Build a LEGO Mustang‘. And not just any Mustang either, it’s the same glorious 1960s GT350 fastback that first appeared here almost two years ago, with remote control drive and steering, LED lights, a 2-speed transmission, opening doors, hood and trunk, and a V8 engine. So, what’s it like?

Firstly, as with all the No Starch Press Lego products we’ve reviewed, ‘Build a Lego Mustang’ is a very well published book. High quality, glossy, and with excellent full colour imagery throughout. Unlike previous publications though, ‘Build a Lego Mustang’ is not coffee table art, a Lego history, or varied model showcase. Instead it’s an instruction manual, detailing the 420 steps required to recreate Sariel’s Mustang masterpiece.

Running to 110 pages, Sariel’s book provides the building process to create his amazing Ford Mustang GT350 for yourself, using a presentation and process that will be familiar to anyone who has built an official LEGO set. Like LEGO’s own instructions, ‘Build a Lego Mustang’ includes a complete parts inventory at the start, followed by the traditional ‘spot the difference’ steps that turn a pile of bricks into a complete model.

The book splits the build process into three sections, the first being the Chassis, the second the Wiring, and the final section the Bodywork. Each of these is subdivided and titled so that you know exactly what it is you’re building (something that LEGO don’t do which might be a nice addition to their instruction manuals).

The steps within the book are clear and well laid out, being comparable to LEGO’s own. The images are slightly smaller, to allow the build to fit into a reasonably-sized book (there are more probably around twice the number of steps per page as you will find in LEGO’s own instruction manuals), and the steps themselves are slightly more complex – no bad thing considering that LEGO’s now verge on being overly simple at times.

Image quality is very good, maybe not quite as clear as LEGO’s (which shows us just how good official LEGO instructions are), but certainly easy to understand, and Sariel has added arrows and directional notes in the same format as LEGO do to assist with the larger assemblies. 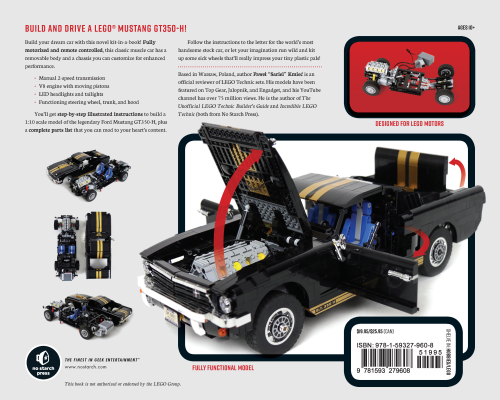 The end result is a set of instructions for a model far more detailed and advanced than any official LEGO set, yet that are as familiar and almost as easy-to-use as those you’ll find inside any official LEGO box.

There is a slight ease-of-use issue though, which oddly comes from the book’s high quality. An official LEGO manual is far thinner and less glossy, but that does mean you can turn the pages and they’ll stay open whilst you build. You’ll need a paperweight to do the same with ‘Build a Lego Mustang’.

And it’s this that is our only complaint with No Starch Press’s latest release; it’s a lovely publication, beautifully designed, well laid out, and well printed. However it’s a book that would probably work better if it, well… wasn’t a book at all.

‘Build a LEGO Mustang’s high quality is perhaps unnecessary for what is purely an instruction manual; if anything it slightly hinders its ease-of-use. Whilst $20 is good value for a book of this quality, it’s less good if the book is only used once (which an instruction manual is likely to be). We suspect the same result could have been achieved with thin paper, less gloss, and for a fraction of the cost. Which is exactly what LEGO do.

However if No Starch Press release Sariel’s latest work as an eBook we can see this initiative opening up a whole new market for LEGO fans to add some brilliant unofficial models to their collections, especially where LEGO don’t have a license to use a particular real-world car brand. Until then we’re not convinced of the need for instructional books such as this one, however if you’d like to build Sariel’s Mustang this No Starch release is a beautiful way to do it.

If you fancy building Sariel’s stunning Mustang GT350 you can get hold of the ‘Build a Lego Mustang’ instructional book via the No Starch Press website for $20, where you can also find a downloadable parts list and No Starch’s complete Lego book line-up.