Rallying was big business in the 1980s. With few rules making for wild cars, the WRC attracted as much attention as Formula 1, and Porsche wanted a piece of it, despite the unlikely suitability of their road-going products. Of course Porsche had a plan; their incredible all-wheel-drive 959, which would have been ideally placed for the WRC’s top-tier Group B once it was finished.

Unfortunately for Porsche the banning of Group B meant the 959 never got the chance to properly compete (although this did mean that the car raced in Paris-Dakar instead, becoming one of the most wonderful and weird winners in the event’s history), but before then Porsche still wanted a rally car whilst the 959 was in development. Cue the 911 with a giant wing on the back. 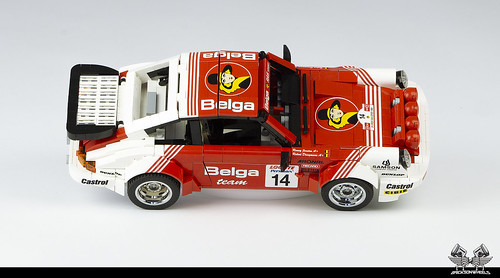 The 911 of the 1980s was of course only rear-wheel-drive though, meaning that the SC/RS version homologated for rallying stood very little chance against the all-wheel-drove competition in the WRC, but it was still a quick car. Switching to the lower-spec European Rally Championship proved smart, where Porsche’s stop-gap rally car was prepared by Prodrive and took several wins.

These two spectacular recreations of the Porsche 911 SC/RS come from TLCB Master MOCer Dennis Glaasker aka Bricksonwheels, who has faithfully recreated the ’80s icon in astounding detail. Each 1:14 scale model replicates a real version of the 911 rally car, with the famous Rothmans and Belga team liveries brought to life in incredible realism thanks to fellow previous bloggee JaapTechnic’s decal-producing wizardry.

Opening doors and engine covers reveal an interior and engine as beautifully recreated as the stunning exteriors, and there’s loads more to see of both 911 SC/RS models at Dennis’ ‘Porsche 911 SC/RS in Lego (1:14)’ album on Flickr. Click the link above to head to a forest in Belgium sometime in the 1980s. 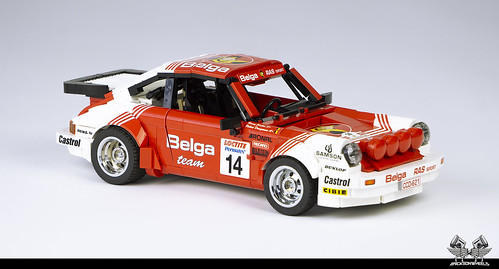