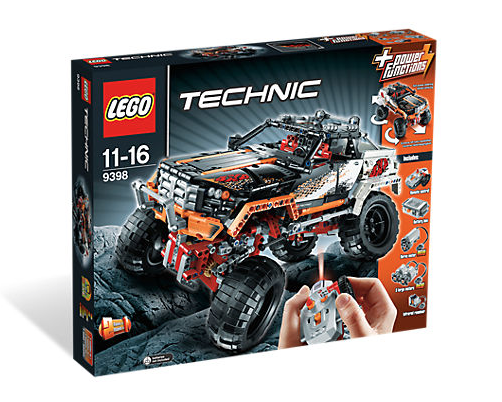 The Lego Car Blog reviewing Anorak, hanging nerdily for a short while, has today been removed from the office coat-rack and thrust at one of you for another Reader Review! Doubling his chances in the ongoing Review My Set Competition is Marco. qm of MOCpages, who adds another set to the Set Review Library. Over to Marco…

The 9398 4×4 Crawler, around $200 when I bought it, and it looked great on the shelves at the shop. A little expensive? Not really, it comes with 2L motors, a Servo motor, a battery pack and the signal receiver with the controller. Plus another 1,321 pieces.

The set comes in a big grey box, containing many different bags filled with bricks, the building instructions, and nothing more. It’s definitely not the box of the 42056 Porsche 911 Gt3.

Building 9398 you start with the chassis – as always in Technic sets – adding the two L motors for power to all four wheels and the Servo motor for steering at both the front and back of the vehicle. However after a time you’ll notice that the gear ratios are aggressively slow, which some builders won’t like, and for such a big set there is no V8 engine… in fact there is no engine at all! Even the little 8256 set has an engine! If mechanical functions are your thing then unfortunately 9398 will prove disappointing.

On to the looks of the set, where things don’t get much better. 9398 resembles a modern El Camino monster truck, yet looks neither strong nor powerful, more like a graffiti artist has spray painted Barbie’s Jeep. Not good. (Agreed! Ed.)

OK, let’s stop talking about all the bad stuff. 9398 is the type of LEGO set which is useful if you’re the kind of builder that buys sets for the parts, where it is a good investment. With multiple electric components and those great-looking (and huge) tyres that are under-utilised here, there’s plenty to pilfer for your own creations.

LEGO’s electrical components have followed the same trend as Peugeot cars though; some great things before 2005,  after which they decided reduce the quality. In 2003 the astonishing 8376, 8475, and 8366 remote control racers sets also used two motors for power and one for steering, but they were better, faster, and had a lot more power. The remote controllers on these three sets also had a very comfortable shape, whereas the controller on 9398 is a little bit too small, making it hard to use and it won’t give you the best ‘driving’ experience.

Thank you to Marco for joining us here with his excellent review of LEGO’s 9398 4×4 Crawler. You can read the other reader reviews that make up the Set Review Competition, along with all our past reviews, at the TLCB Set Review Library.