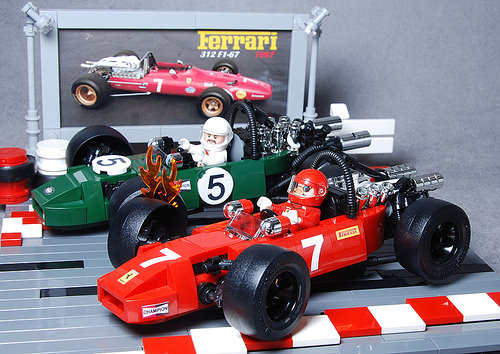 The pig-nosed driver of this Ferrari 312 isn’t taking any prisoners with that move. Under Bernie Ecclestone’s helm Formula 1 would see said combatant confined to the pits for ‘causing a collision’, but this is 1967, and rules were for sissies.

The car the Ferrari has swiped has appeared here at TLCB before, a Brabham BT24, and it’s now pictured alongside the latest build by Flickr’s Pixel Junkie in this wonderfully nostalgic Formula 1 scene.

It’s Brabham that went on to win the 1967 Formula 1 World Championship, despite having a slower car than the Lotus of the time, whilst Ferrari finished a lowly fifth. Ferrari may have lost the battle in ’67, but it is they who won the war, with Brabham fading into history whilst the prancing horse has gone on to win almost twice as many titles as any other team.

Being British we prefer the outcome in ’67 though, so we’ll leave this post with a picture of the Brabham BT24 rightfully back in front of the Ferrari 312, and you can us find at Pixel Junkie’s photostream feeling patriotic. 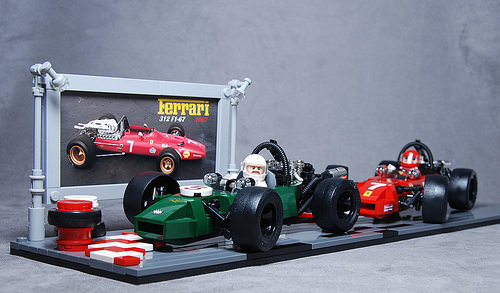