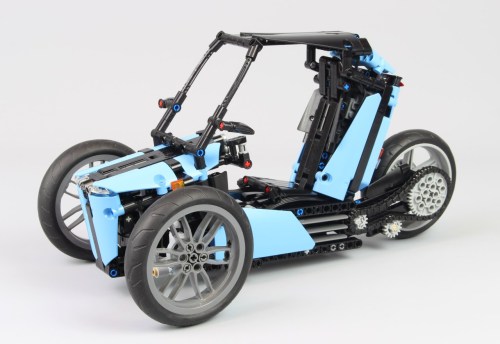 Weird electric city vehicles seem to pop up all the time in concept form tasked with easing urban congestion and cutting pollution. And then no-one ever builds one because, frankly, consumers would rather sit traffic breathing polluted air in a giant SUV.

Still, one day maybe these things will take off, but until then we’ll make do with previous bloggee Nico71‘s BuWizz-powered leaning tricycle. Similar to Toyota’s limited production i-Road concept, or those weird three-wheeled Piaggio scooter thingies, Nico’s concept can actively lean into corners to keep it stable, and with up to eight times the power of LEGO’s own Power Functions system from the BuWizz bluetooth brick, it probably needs that function.

It’s not our usual fodder here at The Lego Car Blog, but it’s a rather cleverly engineered build and one that we’ll probably all be driving in real life at some point. See more on Brickshelf via the link above.