Rally to the Maxi 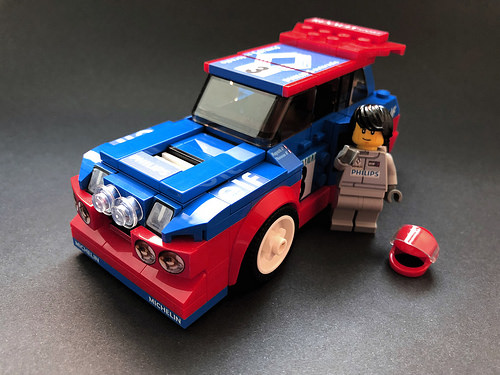 It’s the early 1980s, and everything has gone ‘Turbo’. Sunglasses, deodorant, razors… all of them could be found in ‘Turbo’ form, thanks to cars such as this one; the nuts Renault 5 Maxi Turbo.

Based on Renualt’s road-going hot hatch, the Maxi Turbo made almost 350bhp from its tiny 1.4 litre engine in rally form, enough to win the Monte Carlo Rally in its first outing in the World Rally Championship in 1981.

Ultimately the Renault 5 Maxi Turbo was quickly surpassed by the arrival of all-wheel-drive machines from Audi, Lancia and Peugeot, but it had left its mark, and a good road-going 5 Turbo is a sought-after car today.

This Speed Champions recreation of the Maxi Turbo comes from Fabrice Larcheveque who has recreated the car rather neatly in 6-wide form. Resplendent in an authentic livery courtesy of custom decals (and a bit of paint) there’s more to see of Fabrice’s 5 on both MOCpages and Flickr. Click the links to don your Turbo sunglasses and take a look.