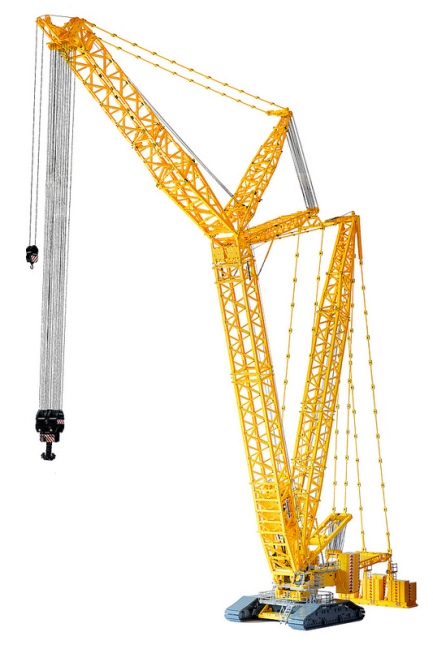 Even your Mom hasn’t seen one this big.

This is a Liebherr LR 11000 crane, and it’s seven and half meters tall in its full configuration (or 2.5 metres when indoors so it fits!). Built in 1:24 scale, this brick-built behemoth weighs 27kg, including 5kg of lead ballast. Other than that lead weight, some string, and a few 3D-printed pulleys, the entire model is completely constructed from standard LEGO pieces. Which makes it even more astonishing that this enormous replica works.

Dawid Szmandra is the engineering genius behind the build, and yes this 27kg Lego creation really does work. With four Mindstorms EV3 processors, nine motors, seven light sensors and a touch sensor, this incredible creation can do everything that the real Liebherr LR 11000 can do. Only at one twenty-fourth the scale. Which is still massive.

The drive to the tracks comes from two EV3 Medium Motors, whilst another can rotate the entire superstructure. Five Large Motors plus another Medium power the six separate winches, whilst the sensors can measure the load and winching distance.

The result is a crane, built entirely from little plastic bricks remember, that can lift a chair. There’s only one way fully appreciate what this incredible creation can do and that’s to view it in action. Join us watching in amazement via the video below, and you can see all the images of Dawid’s unbelievable model at his Flickr photostream and via the Eurobricks discussion forum.