Whilst it might look like the dreams of a TLCB Elf that’s been eating a glue stick all night, this specularly shiny creation by Flickr’s ianying616 is based upon a real vehicle. And what a real vehicle… 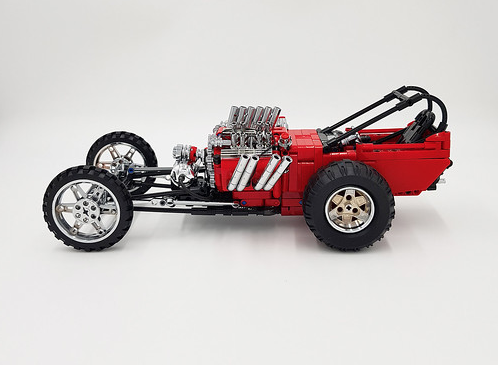 Built by drag racing legend Tommy Ivo in the late 1950s, the ‘Twin Buick’ dragster was the first gasoline powered dragster to run under nine seconds, recording an 8.69. Powered by two Buick ‘Nailhead’ V8s mounted side-by-side, the car was also the first to record speeds over 170, 175 and 180mph.

Tommy went on to build several other wild drag racers throughout the ’60s and 70’s whilst also sidelining as sit-com actor. Now in his 80s he was inducted into the Motorsports Hall of Fame in 2005, with his racers still appearing at shows around the world.

Ianying’s expertly presented recreation of Tommy’s ‘Twin Buick’ captures the insanity of the real car brilliantly and there is a huge gallery of further imagery to see on Flickr. Click the link above to head to the strip and buckle up for the most exciting nine seconds of your life*.

*Insert your own ‘Your Mom’ joke.