LEGO’s 42054 Claas Xerion 5000 tractor is one of the very best sets that we’ve ever reviewed. It’s so good in fact that we can think of little that could be done to improve it. But that’s not to say it can’t be enhanced with a little MOCery. With an adjustable hitch both front and rear that includes a power-take-off, a wealth of attachments can be developed to accompany LEGO’s brilliant set.

Which is exactly what MajklSpakjl of Eurobricks has done. Coupling neatly to the rear of the Claas Xerion tractor Majkl has constructed an enormous Krampe HP30 dump trailer, complete with steering axles and working suspension, and utilising the tractor’s rear power-take-off to drive the dumping mechanism remotely. The complete rig functions beautifully and you can watch it in action and see all of the photos at the Eurobricks discussion by clicking the link above. 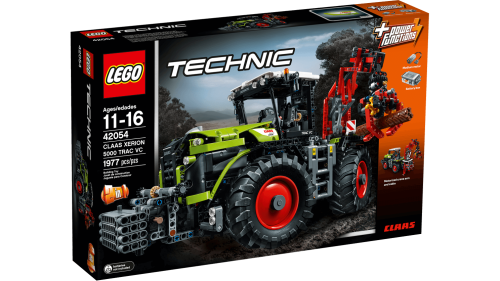 It’s time for another official LEGO set review here at The Lego Car Blog, and it’s a big one. Welcome to the Claas Xerion 5000 Trac VC.

This TLCB staff member has wanted to get his hands on LEGO’s 42054 Claas Xerion set ever since he first saw it. A large lime-green tractor now sits next to him as he types, so has it met expectations?…

42054 sits, a little surprisingly, in the middle of the current Technic range. A little while ago it would have probably been the Technic flagship, but so huge are the current models getting that the Claas is less than half the price of the Volvo L350F and Porsche 911 GT3 RS. However at almost 2,000 pieces 42054 actually features a few hundred more than the big Volvo.

Many of these are new too, with brand new (awesome) tyres, and a wealth of new bushes and pin connectors making their debut in this set. LEGO have employed a few interesting techniques in building with these, as some of these parts are used purely as a construction aid (think an unseen bracket on a car bodyshell that serves no purpose once the car is built, but allows a robot to align a laser or something during manufacturing), and all are coloured in a way that aims to assist with the build process (as opposed to the colour being chosen to best suit the finished model’s aesthetics).

If that makes you concerned about how authentic the Claas looks, don’t be. 42054 is one of the finest looking Technic sets ever produced, and it continues the trend of featuring almost Model Team levels of detailing, with Technic lift-arm holes concealed by smooth plates, lights, mirrors, and some very well chosen stickers.

The downside of the aforementioned colour choices is that black and dark grey parts can look almost identical in the instruction booklet, and when you first come across one of the new pieces you may spend ages looking for it amongst a sea of 2,000 bricks, scanning for black, when it is in fact nestling in a pile of grey. Not that this reviewer did that of course. He’s far too experienced to make that mistake. 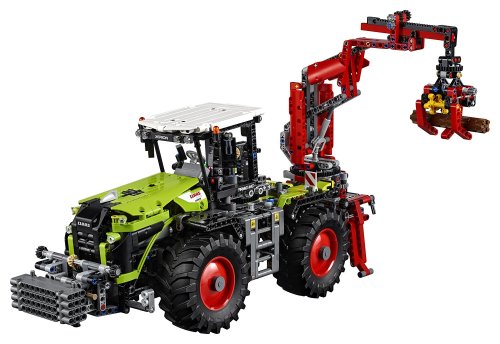 Colours aside the instructions are clearly laid out, and feature some huge sub-assemblies. Which brings us neatly on to a new phenomenon that the Claas Xerion demonstrates wonderfully; Density of Engineering.

Yes, we have just made that phrase up, but 42054 features some of the most compressed and tightly-packed mechanics of any LEGO set. Ever.

It’s the first set where the design has genuinely amazed us in its complexity – it’s so far above our building ability that we could never hope to better it. Some of this engineering brilliance fulfils relatively simple tasks, for example when the motor isn’t in use the battery box is automatically switched off (a thoughtful piece of design), whilst other elements, such as the three-mode steering, are mind-bendingly fantastic. END_OF_DOCUMENT_TOKEN_TO_BE_REPLACED