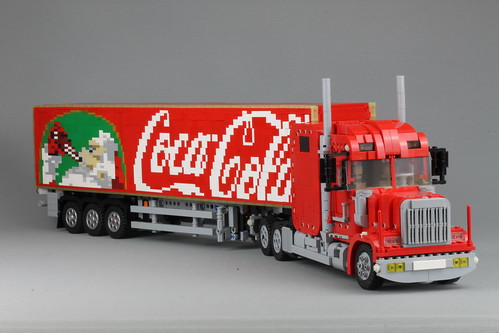 Actually this is the most American thing* we’ve ever seen (following today’s earlier post featuring a ’70s muscle car with a giant flaming bird on the hood).

Seriously though, it’s a mightily impressive mosaic that not only looks stunningly accurate, it’s so brilliant it almost makes the superb remote control tractor unit fade into the background. Which is what good branding is all about.

There’s more to see of Lasse’s amazing rendition of the probably the world’s most famous truck at his photostream via the link above, where you can also find a link to building instructions so that you can build this design for yourself.

*To maintain our BBC-like impartiality, here’s the Soviet version too! 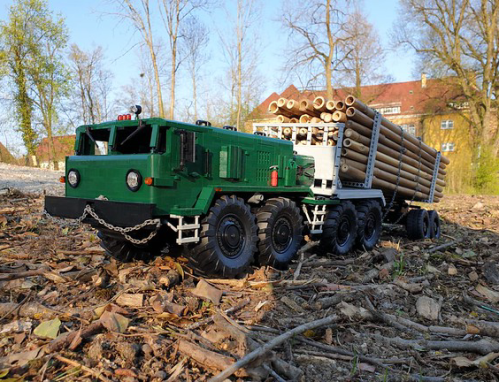 This mega MAZ-537 8×8 truck, complete with an enormous logging trailer, was inspired by a similar creation by Pavol Vanek that featured here back in 2015. Following appropriately slowly is this version by Matt’s Lego Creations, whose own MAZ logging truck has arrived here half a decade later. Measuring over a metre long it’s quite a beast, and one you can see more of on both Flickr and Eurobricks. 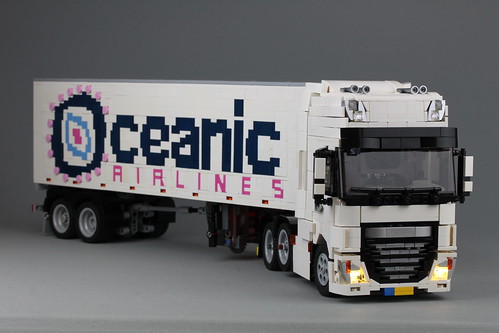 This is a DAF XF Super Space Cab truck and Oceanic Airlines trailer, complete with a brilliant brick-built mosaic, remote control drive and steering, and LED lights. Built by previous bloggee Lasse Deleuran it’s a superb model, highlighting just how good Lego vehicles can be, yet it’s was you can’t see that’s even more impressive.

Utilising a programable PFx brick (a kickstarter project that debuted here way back in 2017), Lasse’s truck not only has remote control drive and steering via bluetooth and a working fifth wheel, it also contains a complete light and sound sequence programmed by the builder into the PFx brick, bringing his model spectacularly to life.

The PFx brick can be programmed with an infinite array of movement, light, and sound, much like the classic Technic Barcode Truck from 1997, only much smaller, and a fair bit cleverer too.

Head to Lasse’s photostream via the link above to see more of his Oceanic Airlines DAF XF, where you can also find a link to YouTube showing the both PFx brick in action and also how Lasse programmed the sequences used in his model. 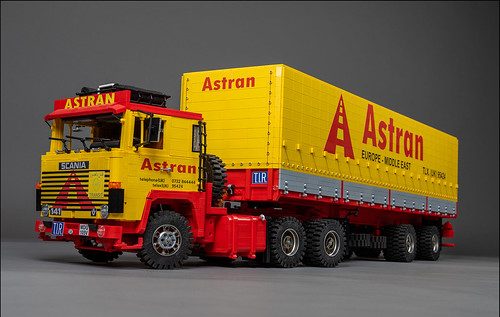 Lots of things travel between Europe and the Middle East. Drunk British tourists and weaponry seem to the primary exports, whilst the imports aren’t always that great either, but there’s lots of stuff to celebrate, with much of it travelling the Seriously Long Way between the two continents in trucks like this.

Built by Master MOCer Dennis Bosman (aka legotrucks), this brilliant classic Scania LB141 complete with a superb Astran Europe-Middle East livery (designed by fellow Master MOCer Dennis Glaasker (aka Brickonwheels)) is one of the thousands of trucks that route their way between the two land masses.

Spectacular detailing is evident throughout the build, with both the truck and trailer recreated beautifully in Lego form, with a tilting cab, accurate engine, working steering, trailer support legs, and – to emphasise the Middle Easterness – a pair of brick-built camels not shown here.

There’s much more to see of the Astran truck, trailer, and camels at Dennis’ Scania LB141 Flickr album – click the link to join the journey along the Silk Road, plus you can read Dennis’ Master MOCers interview here at TLCB via the first link in the text above. 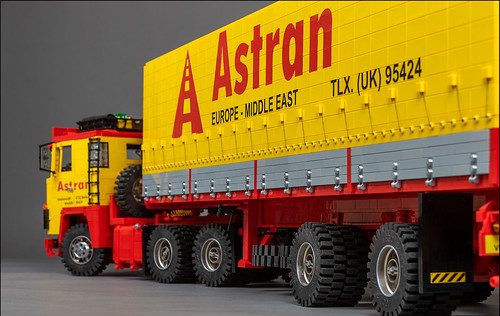 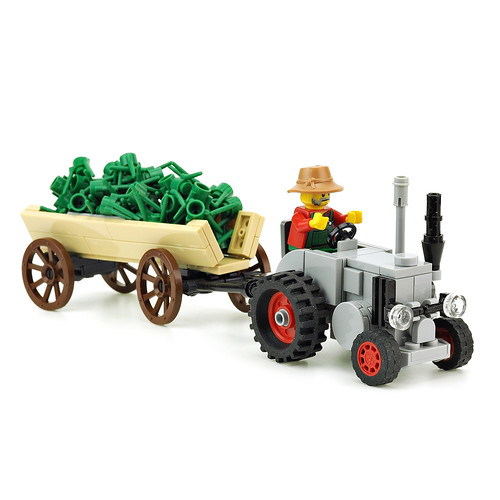 We think that’s what a small bulldog is, right? Except pugs are bordering on inhumane. Anyhow, this small bulldog is not a pug, rather a miniature version of the ancient Lanz Bulldog tractor, as built by Flickr’s de-marco. He’s made instructions available and you find them and more great Town scale builds at his photostream – click the link to take a look. 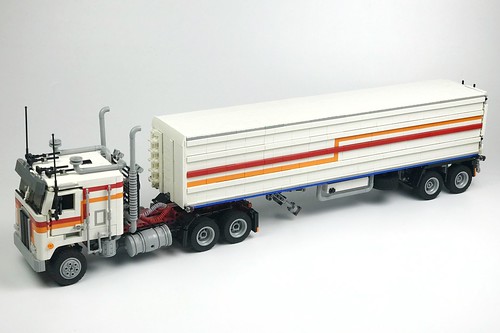 We end today’s truck double with another magnificent remotely controlled cab-over truck and trailer combo, this time from the other side of the Atlantic where such set-ups are much more unusual.

This Kenworth K100 is one of relatively few American cab-overs, being apparently designed with only a ruler and a set-square, and it’s been recreated absolutely beautifully in Model Team form by previous bloggee Vladimir Drozd. Incredible attention to detail is visible everywhere on the outside, whilst Power Functions motors are hidden within to bring the creation to life.

It’s a model that is definitely worth a closer look and you can join us in doing just that at Vladimir’s Kenworth K100 Flickr album via the link above. 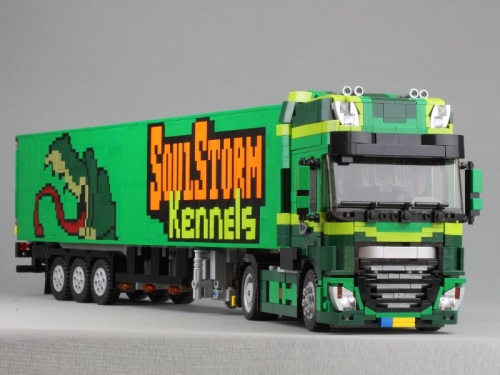 We have no idea what Soul Storm Kennels is, but their logo looks awesome on the side of a truck trailer! Pulling this magnificent tessellation of bricks is a DAF XF XT Super Space Cab by Lasse Deleuran aka gtahelper. Power Functions motors and an SBrick bluetooth brick give the model remote control drive, and there’s more to see (plus building instructions) via the links above. 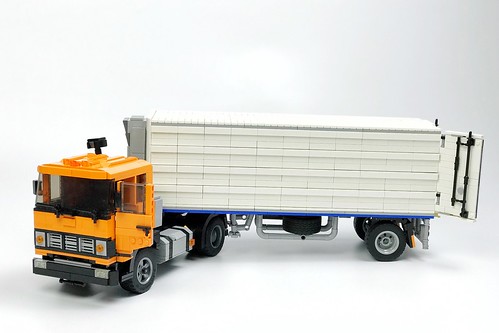 Like most Soviet vehicles, the MAZ 5432 suffered from Communism’s compete ban on creative naming, but it did look rather nice. At least in Lego form it does, thanks to this beautifully constructed and remarkably well detailed Model Team replica by Flickr’s Vladimir Drozd. There’s more to see on Flickr, and you can take a look via the link above. 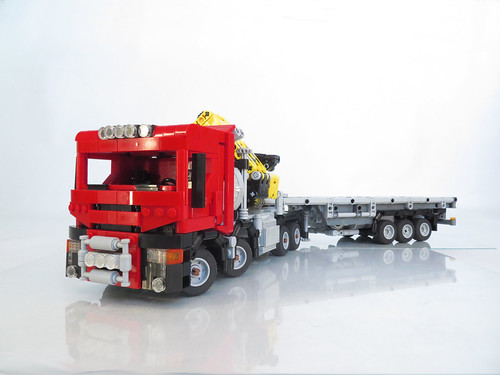 We receive a lot of requests to promote LEGO Ideas entries (the platform whereby fan designs can become real LEGO sets) here at TLCB, which we must decline every time (so please don’t send us them!). However occasionally our Elves find a creation that’s so well engineered it could be an official LEGO set. This is one of those times, and even though this model is not on LEGO Ideas, if someone told us this was a set due out later this year, we wouldn’t question it.

Built by Krall of Eurobricks and Flickr, this top-quality crane truck looks every inch a Technic set (it fact it’s inspired by the official and much larger 8258 Crane Truck), adopting LEGO’s newer more detailed style and packing it with superb functionality.

Power Functions motors give Krall’s truck remote control drive and four-wheel steering, there’s a tilting cab, and then our favourite feature; a gearbox that enables one hand-operated cog to control three separate functions; the truck’s four outriggers, the crane’s rotation, and the first of its three boom extensions.

A flatbed trailer with working support legs is thrown in too and you can see more of Krall’s superbly store-worthy creation at both Eurobricks and Flickr via the links above. 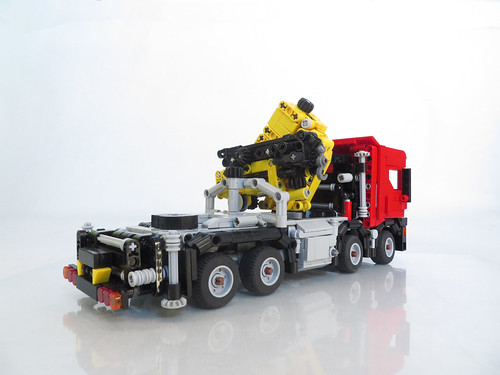 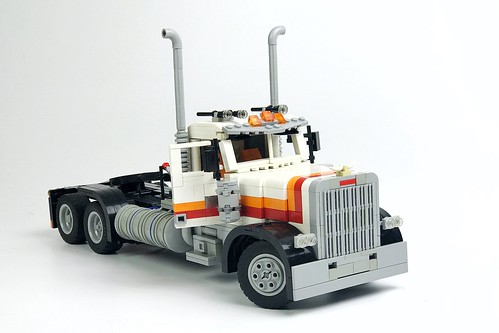 This phenomenal Peterbilt 379 was discovered by one of our Elves on Flickr today, and it comes from Vladimir Drozd making his TLCB debut. Vladimir’s model features some spectacular attention to detail, including a superbly replicated engine under the tilting hood, an accurate interior behind opening doors, and even air lines for the trailer hook-up. 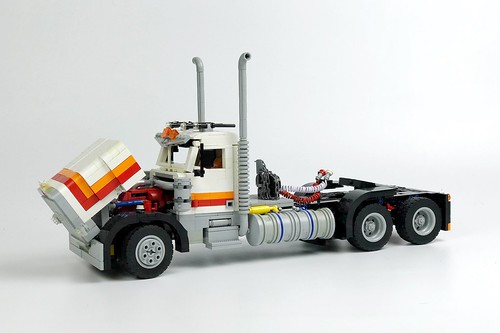 It’s a properly good demonstration of how to build and photograph a Model Team creation and there’s lots more to see, including a pair of trailers with some equally well-detailed loads, at Vladimir’s ‘Peterbilt 379’ album. Click the link above to make the jump to Flickr for the complete image gallery. 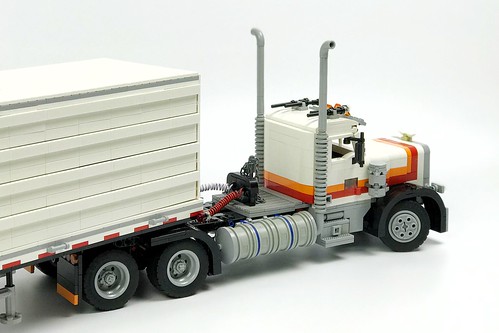 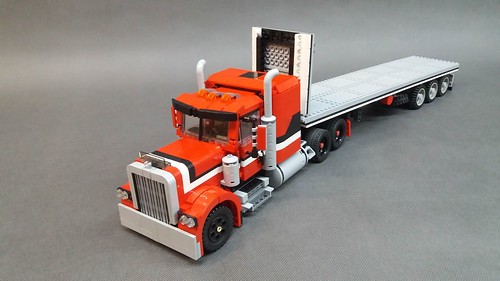 Is there anything more Model Teamy than a big red and black truck? LEGO have made several over the years, and continue to now that Model Team has morphed into the Creator line.

Flickr’s Martin Nespor adds another to the list with his excellent truck and trailer in Model Team’s quintessential style and most favoured colour scheme. Head to Martin’s photostream via the link above for all the imagery. 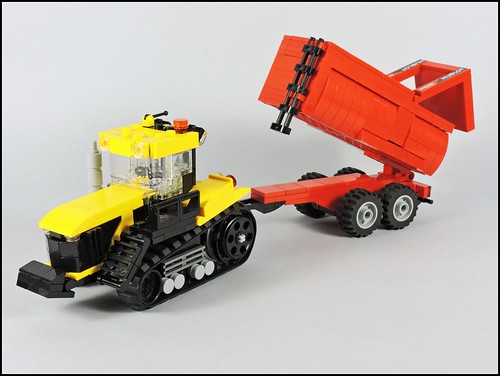 Discovered on Flickr today, this is a Caterpillar Challenger MT 865 tractor, and not only does it look properly cool for a tractor, it’s towing something that has so many ‘Your Mom’ jokes we don’t know where to start. Keko007‘s Krampe Big Body 500 is as detailed as the Caterpillar pulling it, and you can see more at Keko’s album via the link above. 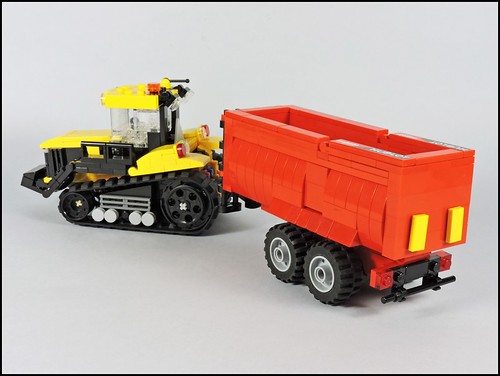 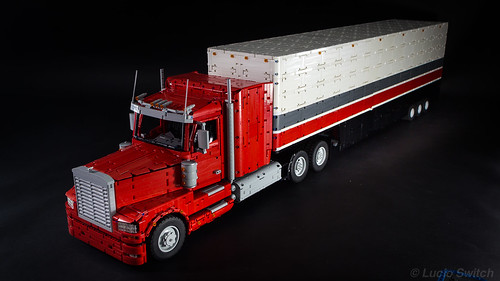 Porsche’s 911 RSR racer is easily the most earsplitting racing car that this TLCB Writer has heard. Aston Martin and Corvette V8s, Formula 1 cars,  LMP1 racers, historic V12s… nothing hurts your ears like an RSR. They’re quite a thing to behind then, and LEGO have added their own rather excellent (and significantly quieter) version to the Technic line-up with the 42096 Porsche 911 RSR set.

The real 911 RSR is damaging hearing globally as it races around the world in various international series, including the World Endurance Championship which includes Le Mans, and GT3 racing. Transported by large trailers, we would not want to be inside when an RSR is fires up. Previous bloggee Lucio Switch has decided that his 42096 set deserves a fitting race transporter too, and as such has built this incredible fully remote controlled Technic truck and trailer to match the 42096 Porsche 911 RSR set.

Inside the trailer, which includes a matching livery, are tools and a tyre rack, a parking space for the 911 RSR set, and a six-seat cabin/meeting room for the team. The truck towing the trailer is just as impressive, with a brilliantly detailed six-cylinder engine (above) and interior, working steering, suspension and fifth wheel, and opening doors and hood. It also looks spectacular, as you can see in the beautiful photos here, with Lucio’s stunning presentation and lighting. 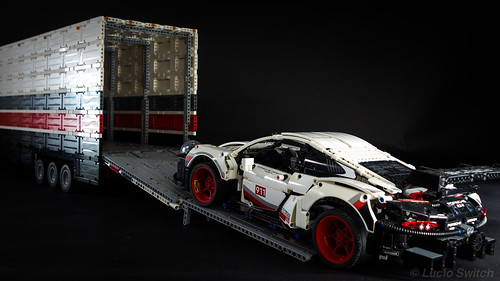 Both truck and trailer also feature Power Functions motors, giving the model remote control drive and steering, a two-speed gearbox, motorised support legs and a powered trailer ramp. There are more images of this phenomenal racing transporter available to view at Lucio’s Flickr album entitled simply ‘US Truck’ and at the Eurobricks discussion forum – Click the links to make the jump to see full details, and if you haven’t heard the real Porsche 911 RSR on which the 42096 Technic set is based, max your speakers, click here, and then imagine a noise at least a billion times louder. 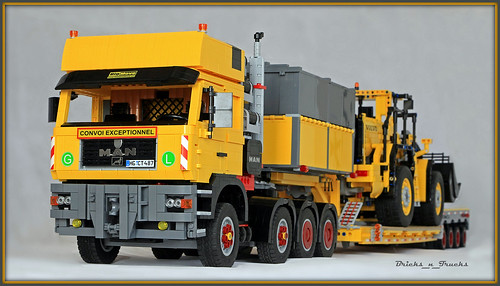 Remote control enormity is the order of the day here at TLCB, as today’s second creation is also packed with Power Functions motors. In fact both are, as this is two amazing models in one, with a BuWizz-controlled MAN F2000 EVO pulling a giant SBrick-controlled Tiefbettauflieger trailer (complete with LEGO’s superb 42030 Technic Volvo L350F set as load). Each is the work of Bricks_n_Trucks of Flickr and each is a stunning showcase for how realistic Lego building can get. Click the link above to make the jump to Bricks_n_Trucks’ photostream for more.

Slaughter is the Best Medicine 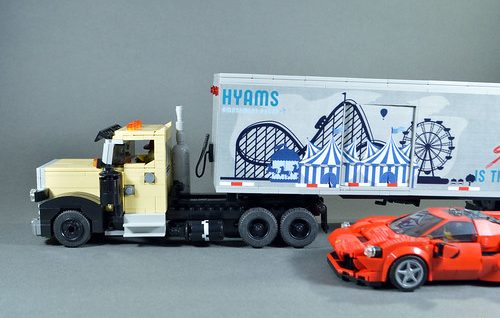 The Dark Knight got pretty much everything right, becoming probably the best superhero movie of all time. Gritty, visceral, and darkly intelligent, it even pulled off that hardest of action movie prerequisites, the car chase.

The streets of Gotham became slightly more crashy thanks to the Joker, and the enormous fairground semi-truck deployed to conduct an audacious kidnapping.

Previous bloggee The Eleventh Bricks has done superb job recreating the Joker’s vehicle of choice, including accurate decals on the trailer complete with an extra ‘S’ added to the tag-line. Head to Eleventh’s photostream via the link above to put on your happy face. 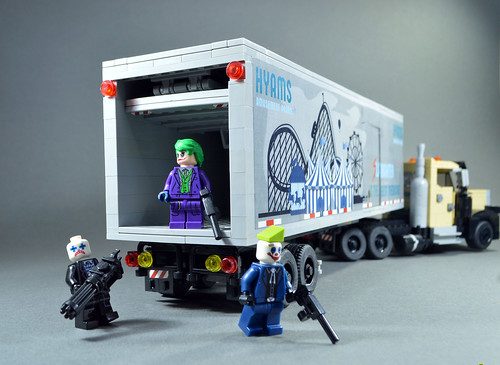