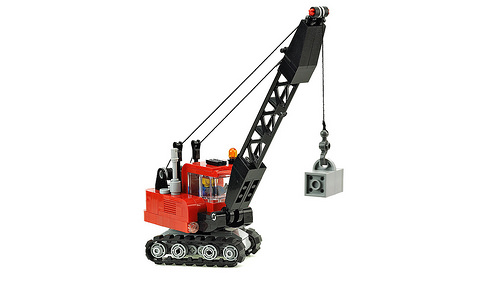 OK, we can fit one more in! This top-notch old-school crawler crane comes from previous bloggee de-marco, and like his previous builds he’s made video instructions available too. Take a look via the link above and you can watch the ‘How To’ video to help you build your own crawler crane below.

Most of The Lego Car Blog team are die-hard petrol heads, who exclusively build Technic supercars, filled with working features and Power Functions. However, this writer is not really a car expert nor a Technic expert either. I was recently defenestrated at a TLCB party for having suggested that it might be fun to try to build a spaceship. Fortunately, I survived the incident. The TLCB executive penthouse offices are actually located on the ground floor of a small industrial unit near Wolverhampton. Much chastened, I have resolved to learn more of the art and craft of big-scale, motorised Technic models. What better way to do this than to build one of the monsters of the current Technic range: the 42042 Crawler Crane. 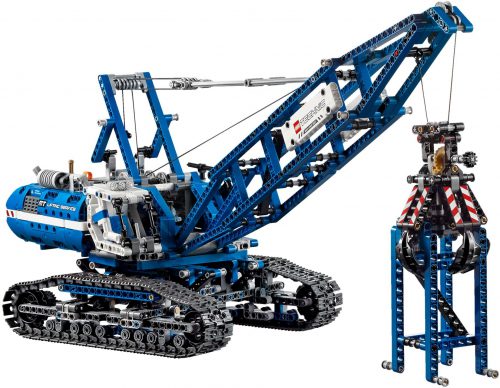 The set came in nicely large box, with the usual high-quality photos showing the various functions of the crane. The back of the box shows the “A” and “B” models. In contrast to Sariel’s review, I thought that the box was nicely full when I opened it. Tipping the various bags out of the box took me back to childhood Christmases and the excitement of opening the old Technic sets with their studded beams. The first thing that struck me was that the various bags were numbered, just like big System models are nowadays. As I built the model, it was great that I only had one bag open at a time. This made finding the right parts quicker, less frustrating and more fun. A previous big Technic model that I have built had numbered bags but you had to open most of them early in the build, which defeated the point of them in my eyes.

The instruction book is neatly presented and strongly bound. It’s a nice artefact in its own right. Lego instruction books are a lot better at differentiating between dark grey and black than they used to be and this one was easy to use. Disappointingly, for a model in this price range, you have download the instructions for the “B” model from Lego’s website. As the “B” model looks to have the same chassis, there wouldn’t even be the expense of an entire second book. The stickers for the model are in the same bag, which had kept them flat in my case. However, I can see that there’s scope for them to be creased and mangled by the heavy instruction book and so it would be better if they were mounted on a separate card. 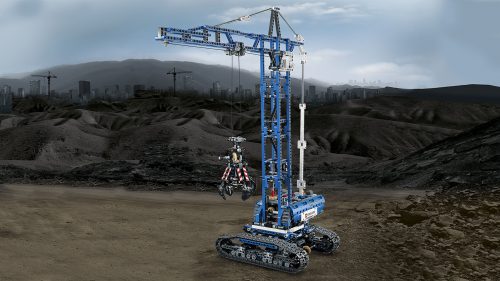 Once I started the build, it turned out that there were actually multiple bags to open for each stage of the build. It was still a lot quicker than sorting through all 1,401 parts in a big pile. First up is the chassis, based around the ubiquitous but strong 64178 differential frame. Building progresses rapidly, with lots of pieces per page. This contrasts noticeably to System sets, especially the ones aimed at younger builders. For most of the stages, I had just five small piles of parts to look through, thanks again to the numbered bags.  After the main chassis, you build each of the sponsons for the tracks. When the two are mated, you begin to realise quite how big this model is going to be. Building the second sponson is a bit boring, as it’s a mirror image of the first but that’s inevitable with this design. When I attached the sponsons, I thought that 5L axles with end stops will be awkward to remove when I disassemble the model. I couldn’t work out why Lego hadn’t used ordinary 5L axles instead. Perhaps one of our Technic expert readers has an idea? Page 48 of the instructions has another step that might prove hard to reverse on disassembly.

By page 54, the chassis was done and it was time to get a coffee and then sit down to assemble each of the huge, 45 link tracks. Whilst I clicked the links together, I reflected on the size and complexity of the finished chassis. It reminded me that much of what you pay for in a Technic set is the immense amount of R&D time that must go into a model like this. To speed up the assembly of the tracks, I made standard 10 link lengths and then clipped them together, adding the last five.  Strangely, for a set of this size and price, there is no spare link of track. Technic is a harsh mistress. Be careful opening the bags of parts and accidentally losing some. By the end of stage one, I had just five spare pieces and no spares of the small cogs or blue, 2L axle/peg connectors. By the end of the build, I had just over a dozen spares, including the 1×1 round transparent plates used as lights.

Stage 2 looks fast, with just three bags of parts. It builds the gearbox and includes four of the newer sliding gear change collars and a pair of the white, 24T, torque limiting clutch gears. There are also some of the new and very useful 1L collars. Once more, the complexity of the design reminded me of how much design and development time you’re paying for in a big Technic set. This also applies to the design and quality of the individual pieces. Just one L motor drives the all of the functions through this gearbox. That two functions can operate simultaneously, is a testament to the power of modern Lego motors. The end of this stage leaves very few spare parts again. I was actually a blue 2L connector peg short and had to nip upstairs and get one from my collection. 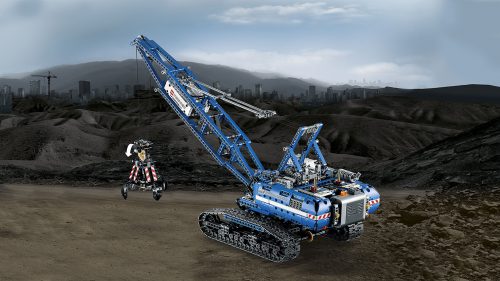 By now I was 96 pages and 1 ¾ hours into the build. There were four more bags of parts left to go. END_OF_DOCUMENT_TOKEN_TO_BE_REPLACED