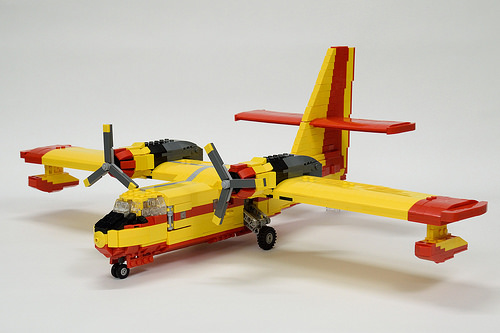 Ah Canada. The United States’ slightly boring neighbour. Home of singing-horse Celine Dion, the catchy pop of Carly Ray Jepsen, and perennial annoyance that is Justin Bieber. Fortunately they also know how to make some cool stuff up there, thanks almost entirely to transportation giant Bombardier.

Founded in the 1930s Bombardier began by making snowmobiles, and have since expanded to build ski-doos, trains, ATVs and aircraft. It’s the latter we have here, in the form of a Canadair CL-215 water-bombing amphibious plane. Designed in the late 1960s to operate at low speeds and in tricky winds, the CL-215 was sold to eleven countries for fire-fighting and search and rescue operations, with 125 units produced until the design was replaced in 1990.

This lovely replica of the Canadair CL-215 comes from previous bloggee Dornbi of Flickr and he’s captured the unusual shoulder-mounted engine configuration of the aircraft brilliantly. There’s more of the build to see at Dornbi’s photostream – click the link above to drop the world’s biggest water bomb.