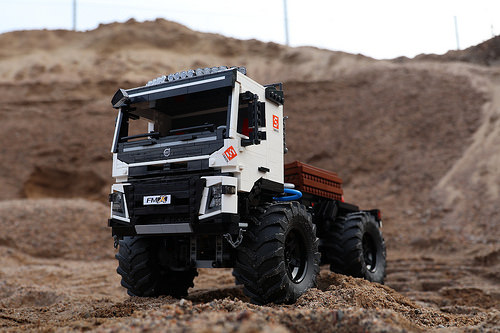 It’s been a slow (read ‘hungry’) week for The Lego Car Blog Elves. However, with their empty stomachs ‘motivating’ them it was only a matter of time before we’d have a creation to share with you.

The hungry Elf responsible for today’s find was duly awarded a meal token and Smartie, upon which something remarkable happened… the Elf ate about half of its Smartie, and it then proceeded to break the rest into pieces. Were we about to witness the first ever moment of Elven compassion and sharing? Were we balls.

The aforementioned Elf scattered the Smartie pieces opposite a curtain in the office and then scurried off. Soon several of its colleagues had sniffed out the unguarded confectionary and landed on the abandoned loot like seagulls on an open bin.

But unguarded the confectionary wasn’t, and the curtains suddenly parted as a huge white truck powered through them. The nearest Elf had just enough time to point and scream before being squashed forcefully into the office carpet, before its scavenging colleagues met the same fate.

A jubilant Elf then re-emerged, scooped up the Smartie remnants, and ran off cackling madly. Sigh. We thought they were getting bored of this.

Still, kudos the Elf in question, which had deployed some remarkable inventiveness to overcome its find’s lack of speed – which normally would have left it unable meet out any smushings.

The vehicular weapon, whilst slow, is a mighty impressive bit of kit though. Based on a Volvo FMX truck, the build features five Power Functions motors that power the four-wheel-drive system, generate air pressure for pneumatically locking differentials, and drive the centrally-pivoted steering, whilst pendular suspension with simply ludicrous articulation and oversize tyres from the 42054 Claas Xerion tractor set take care of truck’s impressive rock-crawling ability.

The build is the work of TLCB debutant dgustafsson1317 and there’s an enormous gallery of high quality images available to view on Flickr. Click the link above to see all of the Volvo FMX Crawler photos, whilst we scrape some very flat Elves out of the office carpet. 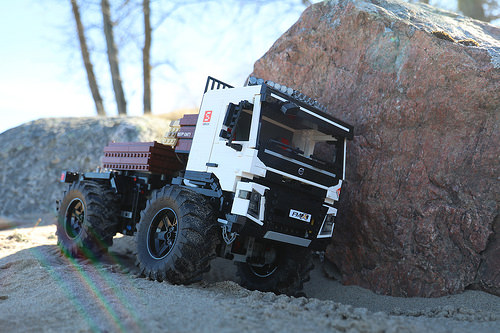