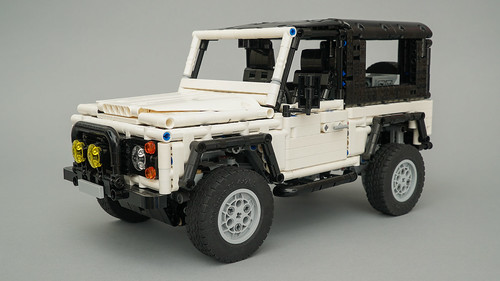 No not that Technic Land Rover Defender, this is the original (it’d be embarrassing if someone thought the new 42110 official Land Rover Defender set was the old one wouldn’t it?…), in North American specification if we’re not mistaken.

The Defender was sold for just a few short years in the United States making it a very rare (and now very cool) vehicle there. As a result prices for Defenders in the U.S have gone insane, which gives us serious inclination to export a few from our home nation, where they can be bought for a few grand and a packet of crisps.

The other alternative is to build your own, which is exactly what Kevin Moo has done with this excellent fully remote controlled Technic version. Underneath the realistic U.S-Spec exterior is a complete four-wheel-drive system with working suspension and remote control steering, plus there are opening doors, a brick-built hard-top, and an authentically spartan interior.

There’s more to see of Kevin’s creation on Flickr and at the Eurobricks discussion forum – click the links to take a look, and you can check out our preview of the upcoming officially licensed Land Rover Defender Technic set (which also inadvertently previews the actual new Land Rover Defender) by clicking here.