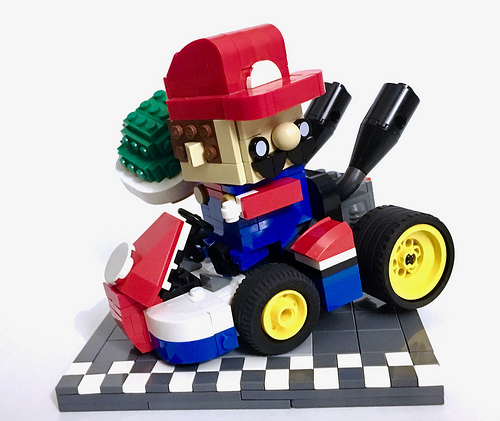 First appearing in 1981’s ‘Donkey Kong’, Mario the dumpy Italian plumber has had quite a life; rescuing princesses, collecting gold, featuring in over 200 video games, and in doing so becoming the single most successful video game franchise of all time.

His highpoint (in our opinion) came in 1992 on the SNES, when he took a break from rescuing princesses in castles to start his own racing series. ‘Mario Kart’ is very probably the greatest racing game ever made, pitting a variety of unlikely characters together in a gloriously whimsical race for glory.

This brilliant depiction of Mario’s finest hour comes from polywen of Flickr, who has created a marvellous cuboid ‘Brickheadz’ style Mario, his go-kart, and a green shell in Lego form. Click the link above to join the race for 150cc Cup! 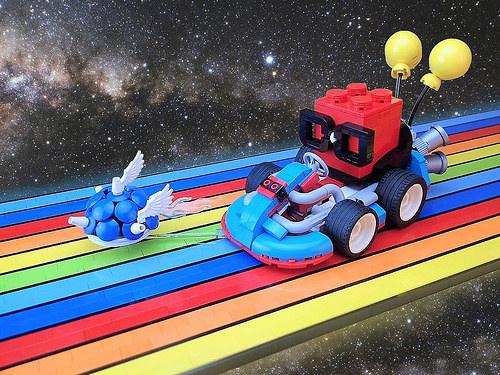 We’re kinda get the feeling that here at The Lego Car Blog we’re a regular annoyance to the proper Lego blogs The Brothers Brick and Bricknerd. That might be because we do regularly try to annoy them though. Nevertheless, Bricknerd do have a neat competition running currently, where their nerdy mascot, er… Nerdly*, is making appearances in LEGO form. Here he is tackling Mario Kart’s fearsome Rainbow Road, and he’s still got two balloons left and a blue shell! Flickr’s [Clever Lego Reference] is hoping for the win and you can see more of his nerdy racer at his photostream via the link above.

*We’ve considered doing something similar with our ‘mascots’, the Elves, but you really wouldn’t want that**.

**Still, at least they’re not that bloody lemur. 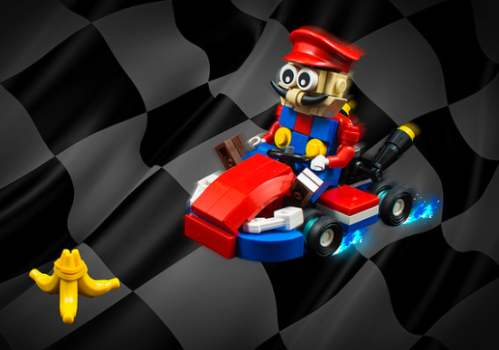 It’s everyone’s favourite Italian plumber! Unfortunately he looks like he’s about to spin off the edge of rainbow road courtesy of that cunningly dropped banana skin. You can join builder Cecilie Fritzvold by frantically pressing the L and R buttons, or alternatively you can click the link above. 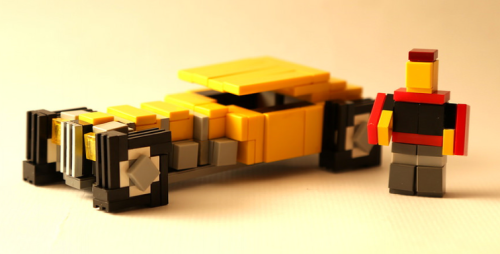 For our readers too young to remember the SNES and Sega Megadrive, and who might be wondering what the graphics were like, wonder no more! This odd pixelated hot rod by Flickr’s RGB900 takes us back to a time of 8bit, cartridges, and blowing dust out of slots – click the link above to join us in the past.