This odd-looking vehicle comes from Flickr’s Tim Inman. It’s a recreation of one of Ed ‘Big Daddy’ Roth’s show rods from way back in 1966, ‘Druid Princess’. There’s lots more to see at Tim’s photostream – click here to make the jump.

Remember, Remember the Fifth of November…

…Gunpowder, treason and plot. For our non-UK readers today is the British celebration of Bonfire Night, also known as Guy Fawkes Night, marking the unsuccessful assassination on King James I in the Houses of Parliament.

James, the first King to unite Scotland and England, was quite a divisive monarch, largely due to the divided nation over which he ruled. Surprisingly this wasn’t because of the union of the two separate kingdoms of Scotland and England, but because of the religious lines that split the citizens of both. Persecution reigned against both the Protestants and Catholics, depending on who was in charge at the time. Thus some of the disgruntled Catholics during the Protestant King James’ rule decided the best way to further their cause was to bomb the King and the assembled parliament. Not a dissimilar tactic to today’s religious extremists. Things never change eh?

Anyway, poor Guy Fawkes, one of the Catholic assassins, was apprehended guarding the gunpowder barrels stashed in the cellars of the Houses of Parliament prior to their detonation, and met a decidedly gruesome end at the hands of the King’s torturers, an outcome celebrated by the Protestant population in London by the lighting of bonfires in the city.

King James I died peacefully many years after the failed plot, and is now perhaps most famous for his translation of the Bible into modern English, whilst the annual festival celebrating his narrow escape has since grown to embrace all UK citizens, regardless of religious persuasion, and is today a fortnight of fireworks parties, bonfires and the burning of effigies (or ‘Guys’).

Being a British-based blog, we thought we’d share this example of one of our weirder festivals with our worldwide readers, and what better way to do so than with some regal transportation fit for a King? Well, a Queen in this case, but it’s the same deal. Matthew Hocker aka Brickadier General has recreated the Gold State Coach used by our current monarch, Queen Elizabeth II, and in use since 1762 in stunning mini-figure detail. Matthew’s work is available to view on Flickr, and you can also vote for it on LEGO’s Cuusoo site if you’d like to see the Gold State Coach become an official LEGO set.

Now please excuse us, we’re off with the Elves to set fire to something. 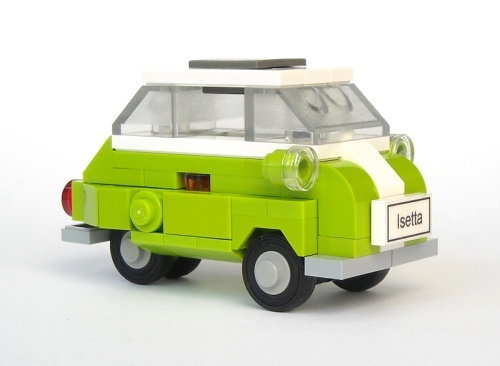 We round off today’s bumper edition of The Lego Car Blog with the news everyone’s talking about; the arrival of the Duke and Duchess of Cambridge’s baby boy (or ‘Wills and Kate’ if you’re a reader of the British tabloid newspapers), third in line to the British throne.

We do sometimes like to link TLCB to current events, and we think we’ve done it rather well this time, with Brickshelf user mijasper‘s lovely BMW Isetta bubble car, which is about as ‘baby’ as a car can be.

‘But’, we hear you say, ‘..the Isetta’s German!’. Yes it is. However, the British Royal Family have a slightly German secret.

There, you see! A seamless link after all. 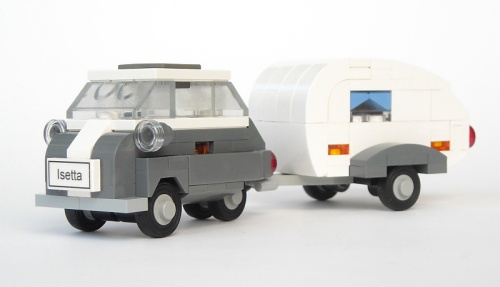