A few Elves got into the stationary cupboard over the weekend and between them ate four entire glue sticks. The result was some very sticky Elf droppings, and also some fairly trippy Elves, which may explain today’s somewhat spaced-out theme.

These two wonderful Neo-Classic Space builds were built for The Brothers Brick (wut!?), each rebooting LEGO’s ancient ‘Classic Space’ line with the latest parts and a whole lot more detail than the original sets achieved back in the early ’80s.

The first (above) comes from space-building legend Alec Hole, who has taken inspiration from the classic 6970 Beta Command Base set from 1980, with its launch pad, control room, and a funky little monorail thing that moved between the two. Alec’s version uses the same recipe but knocks it up a notch with some incredible attention to detail and enough ‘greebling’ for a model five times its size. We love it, and there’s more to see at Alec’s photostream by clicking here.

Today’s second Neo-Classic Space build (below) forgoes the usual rocket-propulsion system for good old fashioned rotors, creating a spacey helicopter that bears a strong resemblance to any one of a number of irritating drones. With Classic Space’s vintage colour scheme, a trans-yellow cockpit, and a smiling Classic Spaceman at the controls, Tim Goddard’s ‘Dragonfly‘ is much more our bag than annoying people in the park with a remote control helicopter (sorry drone owners). Head to Tim’s photostream via link above to see more, whilst we figure out how to remove some insanely sticky Elf droppings.

In Space, No-One Can Hear You Gasp

Being a car blog we’re regularly flummoxed by sci-fi builds, and even though today is no exception the whole TLCB office gasped in unison at this utterly incredible spacebase from TLCB debutant Marco den Besten. Based loosely on the designs from the Tiberian Sun video games, Marco’s enormous creation includes spacecraft, mechs, rovers, hangers, and a whole load of motorised movement. Part of a huge construction for the Legoworld Utrecht show there’s much more to see at Marco’s Flickr album. Click the link above to join the gasping.

This is not a car. Not even close. But it is really cool and we like Classic Space, so here it is. Built by Flickr’s Kloou in collaboration with two other builders, this 1.2metre tall tower finally gives the humble Classic Spacemen a base of their very own.

Constructed using the baseplates from LEGO’s long-forgotten Soccer range, Kloou’s monument to classic space is an impressive feat of engineering featuring a variety of spacecraft and other vehicles, and is also packed with easter eggs. 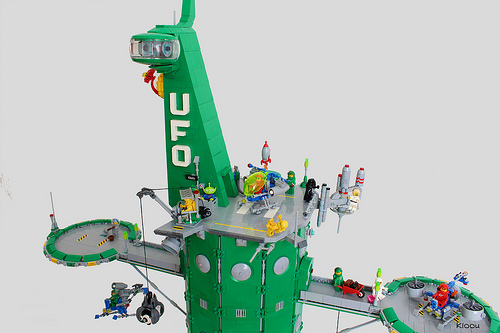 Head over to Flickr via the link above to climb the tower, and see if you can spot Darth Vader and Luke’s famous scene, the three-eyed alien from Toy Story, and Batman amongst the classic spacemen.

Readers of a certain age (and this writer), will be whisked straight back to their childhoods by this brilliant Classic Space layout from Primoz Mlakar on Flickr. Promoz has captured in micro-scale the type of image that millions of children looked at in wonder during the early 1980s in catalogues such as this. Click the link in the text to view the individual ships and vehicles and enjoy the nostalgia.