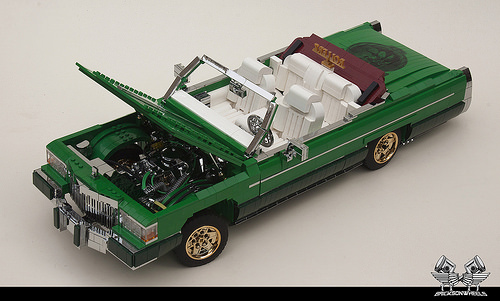 Built by TLCB Master MOCer Dennis Glaasker (aka BricksonWheels) the Caddy shows how far LEGO can be taken as a model-making medium. Really really far.

There’s lots more to see at Dennis’ Flickr photostream, which is where we’re going to be for quite some time. Bounce over there with us by clicking these words. 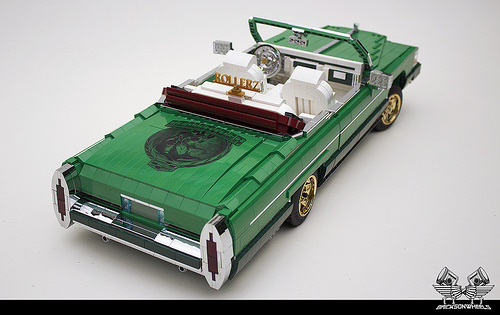 *Yup, they really did call it that.

It’s Hip To Be Square

This Lego Lincoln Lowrider was discovered on Flickr. It’s the work of Doc_Brown and you can see more here. 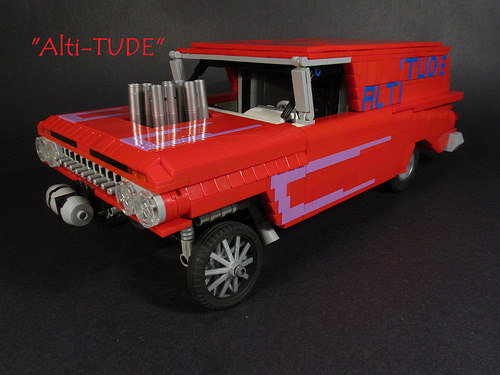 From the A-Team to Only Fools and Horses, 1980s television created some utterly brilliant cult shows. ‘Play Your Cards Right’ was not one of them – a game show in which contestants play a simple card guessing game in order to win mediocre prizes is not a recipe for televisual excitement. Today though, we’ve found two creations that make the ‘higher or lower’ game much more fun.

First up, and ‘higher’ is Tim Inman‘s 1959 Chevrolet Impala gasser van. ‘Altitude’ is fitted with a ridiculous V8, some ace sign-writing, and of course the all important gasser raised suspension. The ‘lower’ Impala to Tim’s gasser is fulfilled by fellow Flickr car builder Lino Martins, and his beautiful 1959 Impala low-rider ‘Low Life’. Both Tim and Lino’s complimenting ’59 Impalas can be found on Flickr – click the links in the text to see more. 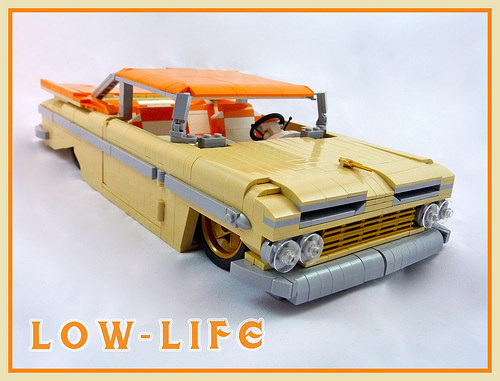 They see me rollin’

Orion Pax is back! This is his latest creation, a Chevrolet Impala Low Rider. A cool enough creation based upon looks alone, Orion goes one further, because this car really works. The suspension is controlled by Lego’s Power Functions motors, so it can bounce, scrape, buck and do other Low-Ridery type things. Check it out at Orion’s blog, or view the video on Flickr.