Alice has got herself a new SUV and it’s the perfect car to one-up Rachel and her Range Rover Sport outside the school gates. It was expensive, but you can’t put a price on safety, and David’s job in the city is paying really well now.

Alice’s new school-run monstrosity (an Oshkosh M-ATV) comes from Robson M aka BrickDesigners and is – frankly – not that absurd at all compared to the pointless car-based one-upmanship that occurs outside the education establishment close to TLCB Towers.

Surely this SUV craze has got to end soon? See more of Alice’s new wheels on Flickr via the link.

The Oshkosh Heavy Expanded Mobility Tactical Truck (HEMTT) is one of the world’s most versatile vehicles. In use by around sixteen militaries worldwide over 27,000 have been produced since the early 1980s, performing roles as diverse missile launching, fire fighting, towing, and simply carrying cargo. Powered by a variety of engines whatever its purpose the HEMTT can climb slopes of over 60% and ford water up to 1.2m deep.

This particular HEMTT is an M978A4 Fuel Servicing Truck, or ‘tanker’ to the rest of us. and it comes from Evan M of Flickr who has recreated the huge 8×8 truck brilliantly in mini-figure scale. Evan’s model features a whole host of neat playable features and there’s more to see of his Oshkosh HEMTT via the link above. 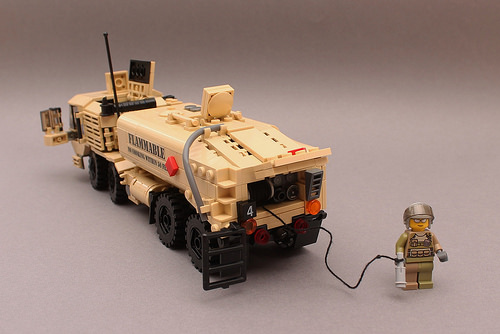 This TLCB writer was busily watching Taylor Swift videos today when a sound most peculiar arose from the Elves’ cage room. It was as though a VHS machine was trying to eat a small woodland creature.

Sigh. A traipse downstairs revealed no woodland creatures of any kind, but it did uncover an Elf, two thirds of which was indeed inside the VHS machine, being rammed further into the mechanism by several of its colleagues.

Another sigh, Mr. Airhorn was awakened from his slumber, and the aforementioned Elf removed from his antique televisual prison.

The cause of the disruption was this, Cologebrick‘s superbly detailed Town-scale Oshkosh Striker airport fire truck in a gloriously bright shade of green. Apparently fire trucks aren’t allowed to be green (they’re red), and thus an Elven disagreement spiralled into its usual violence.

We have since sat all the Elves down and taught them that whilst some colours are more traditionally associated with certain things, anything can be any colour, any colour can be anything, and the world is all the better for it.

The discovering Elf has been awarded two Smarties (green and red) for its troubles, and you can see more of Colognebrick’s neat green Oshkosh on Flickr via the link above.

This neat Oshkosh Jackel M-ATV armoured ambulance comes from previous bloggee JBIronWorks. Only 8-studs wide there’s working steering, an opening rear hatch complete with stretcher, and an assortment of military communications paraphernalia. See more on Flickr via the link above. 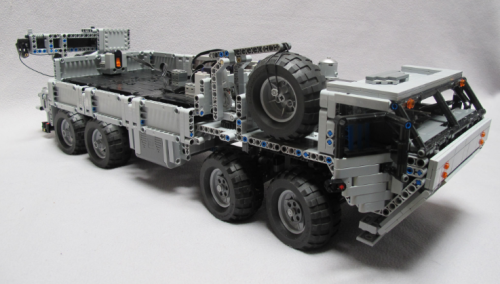 Over to Briskshelf for something big. This monstrous Oshkosh HEMTT military truck features 8 wheel drive, 4 wheel steering, independent suspension and nine(!) Power Functions motors. It’s been built by marthart and you can see all the images via the accompanying Brickshelf gallery – just click on the link above.

Oshkosh, whilst sounding like a foreign narcotic from the ’70s, is in fact a manufacturer of some of the world’s most awesome off-road vehicles. From fire trucks to military transports, Oshkosh’s are used the world over in the harshest conditions. Legohaulic recreates their M-ATV in desert camouflage , complete with working suspension, opening doors, rotating turret and space for four mini-figures. See more on Flickr.