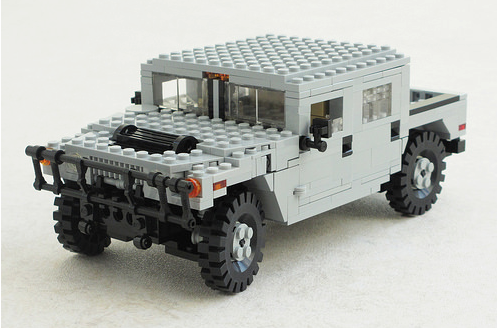 Hummer is probably TLCB’s least favourite automotive brand. It only lasted a few short years in our home nation and the H2 and H3 were so awful that even Americans stopped buying them.

However the original H1 military spec vehicle is a very different animal to the dreadful H2 and H3, being really rather good at going almost anywhere whilst loaded with heavy bits of weaponry, aid, and military personnel, and loved (or feared) by armed forces around the world.

Unfortunately the H1 was also bought by gun-toting, dried-food-storing, apocalypse-hoping (but climate-change denying), camouflage-wearing morons who gave GM the idea to build civilian versions in the first place, so we still hate its metallic guts.

This Lego version is alright though, and comes from TLCB regular Ralph Savelsberg. There’s more of his Hummer H1 to see on Flickr. 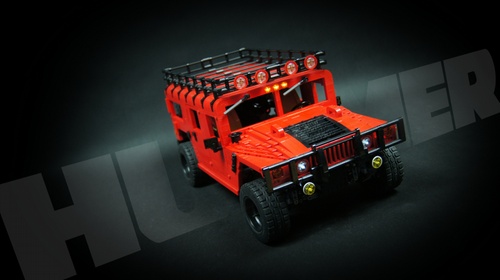 We are not fans of Hummer here at The Lego Car Blog. In fact it might be collectively our least favourite vehicle brand of all time. The Elves though – having no taste whatsoever – love this American institution, and so this post is for them.

Built by Technic legend Sariel, this Hummer H1 is one of the most complex and brilliantly engineered creations of the year so far. Containing four(!) XL Power Functions motors for drive, a remotely controlled high/low range gearbox, working indicator and reversing lights, windsreen wipers and a whole host of other functions, the only way to really see what it can do is in a suitably aggressive video complete with a hard rock soundtrack. Handily Sariel’s got that covered…