We’re mostly a Lego car blog here at the, er… Lego Car Blog, but occasionally we do take a look at the other forms of transport available to the Lego builder. Today our Elves discovered recreations of two of the most famous aircraft to come out of Britain, the De Havilland Mosquito light bomber and the beautiful Aérospatiale-BAC Concorde supersonic airliner.

The World War 2 Mosquito is the work of building-team Jon and Catherine Stead, whilst the gorgeous Concorde model comes from newcomer Table Top Models. Click the links above to see all the photos.

This stunning B-17 Flying Fortress by Ace in a Day was discovered on MOCpages. It looks like it’s been in better nick, but what a wonderfully re-created scene this is. Visit the link above to see more of the crash – it’s well worth your click.

This most excellent fictional VTOL ‘SeaHawk’ by Flickr’s marvellous Red Spacecat has actually previously featured here on TLCB. Mr. Spacecat has recently updated his model with real-world backgrounds like the one above, and rather good they are too. You can see more of the new photos on Flickr. 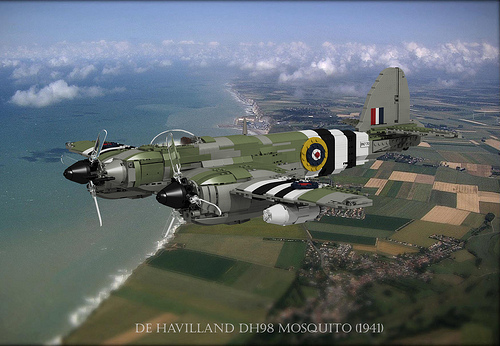 Our second LDD creation in as many weeks! What’s going on? The Elves are pretty grumpy about this as they don’t like digital creations as a rule. Plus this isn’t even a car, so they’re doubly annoyed.

This amazing digitally rendered creation is in fact a 1941 De Havilland Mosquito fast bomber, one of the most important aircraft for the Allies throughout World War Two. Built almost entirely from wood, the Mosquito was one of the fastest aircraft in the world at the time. Not just fast for a bomber, but faster than many fighters too. Digital Lego specialist Peter Blackert (aka Lego911) is the builder, and he’s got a rapidly growing portfolio of famous aircraft on Flickr. You can see more of the Mosquito and his other planes via his excellent photostream.

And if you’re of an Elvish persuasion, don’t worry – we’ve got a busy day that’s back to normal cars (mostly) after this post!

Winter is finally coming to end here at The Lego Car Blog Towers. Good news for us, as skirts outside the office get shorter, and good news for the Elves, who require a lot less de-frosting than they did a few weeks ago when returning from their hunts. A perfect time to publicise a tan-coloured Lego creation then, a colour that’s not often employed in Lego builds due to its rarity, but one that looks superb if it’s used well.

Aircraft-building extraordinaire Sydag has done just that with his wonderful mini-figure scale B-25 Mitchell bomber. Flown throughout the Second World War in all regions of combat the B-25 was adopted by almost all the major Allied airforces and continued in service until well after the war ended. You can see more of Sydag’s beautiful tan recreation of the American classic on Flickr at the link above.

A very excited Elf returned to TLCB Towers today. Excited because it was carrying two creations, and two creations means two meal tokens. So now we have a deservedly swollen Elf waddling round the building, and can bring you this pair of wonderful Great War airplanes designed and built by mrutek on Flickr. Handily for the unbiased nature of this post, each represents a side of the First World War; the Allies with an RAF Sopwith Camel and the Axis Powers with a Bomber Biplane, from the days when bombing involved dropping the explosive by hand out of the side of the plane. To see more of these fantastic creations click the link above. 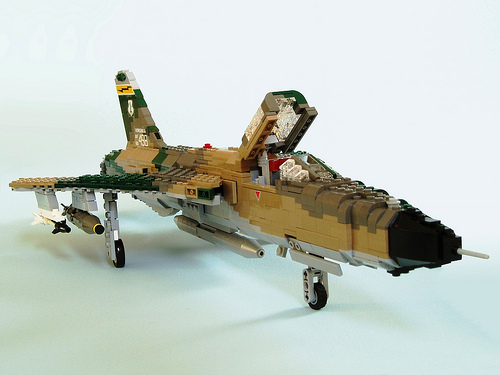 The largest single engine, single seat plane ever made.

The Elves have been watching war movies again. This leads to much noise and many objects being thrown in the office, but also the chance of them finding something rather special when out on patrol across the interweb.

Something like this in fact. TLCB favourite, Ralph S (aka Mad Physicist) returns with this huge F-105 Thunderchief. Originally designed to carry nuclear bombs (its payload was greater than the four engined dedicated bombers of World War 2) it was pushed into service during the Vietnam War fulfilling a number of roles. Unfortunately for the pilots, a large and unwieldy supersonic bomber is not the best weapon for fighting light and agile MIGs, and almost half of the 800 F-105s built were lost during this single conflict.

Due to the loss ratio approaching 50% the F-105s were rapidly withdrawn from service, to be replaced by the F4 Phantom. To see more of this aeronautical relic take a visit to Ralph’s Flickr page at the link above. 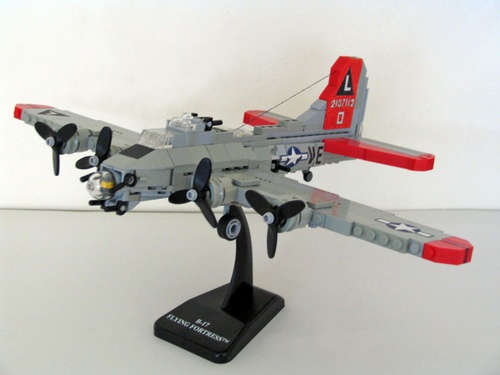 Insert flanking Mustang fighters for twice the awesome. Oh, he did? Click the link to see more!

Following our earlier post this week showcasing the Empire of Japan’s most famous fighter, we’re able to restore some balance with (probably) the Allies most famous bomber; the B17 Flying Fortress. This beautiful micro scale model comes courtesy of John Lamarck on MOCpages. He’s even built the ground crew and escorting fighters to go with it. See more here.

The Lego Car Blog Elves have been wandering the interweb in search of the best Lego vehicles of 2012. Occasionally they find something a little more unusual, like this beautiful Heinkel bomber by Anders T. There are some astonishingly clever techniques at work here. Check it out on MOCpages.