That said we probably wouldn’t trade a modern Renault with a Lada badge on the front for one of their old catastrophes, apart that is, for one car. Launched in 1977 the VAZ (now Lada) Niva was a superbly capable off-roader, more sophisticated than a comparable Land Rover of the era, likely more reliable, and a fair bit cheaper too.

The Niva is still being built today too, and is infinitely better than the monstrosities that the G-Wagon and Range Rover have become. This most excellent Technic version of Russia’s iconic off-roader comes from TLCB favourite Horcik Designs, who has recreated it in Technic form, both with and without Power Functions components.

It’s the remote control version we have pictured above, complete with suspension, all-wheel-drive via an XL Motor, Servo steering, a Li-Po battery, and third-party tyres.

There’s more to see of Horcik’s Technic Niva at both Flickr and Bricksafe – take a look via the links. 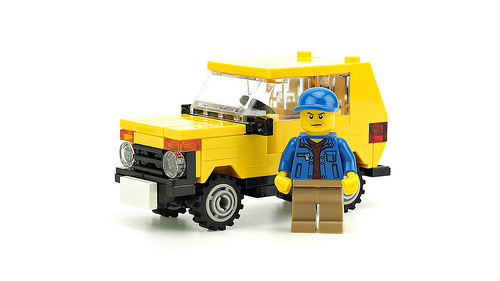 Lada have come in for some stick here at The Lego Car Blog. Now owned by the Renault-Nissan alliance they’ll be making good cars soon enough, but their legacy is one of reheating the leftovers from Fiat, badly. Apart that is, from one car…

The Niva was not built from bits of old Fiat, but was actually rather sophisticated. Launched in 1977 it was the world’s first mass-produced unibody car, featured independent suspension, and with permanent four-wheel-drive and locking differentials it was as good as a Land Rover off-road.

So good that the design is still being produced today, almost completely unchanged in over 40 years. Despite this it’s a car that doesn’t appear much in Lego form, so de-marco‘s brilliant 4-wide version of the iconic 4×4 makes a refreshing change from the usual Land Rovers and Jeeps. de-marco has captured the design superbly in mini-figure scale and there’s more to see of his little Lada on Flickr via the link above.

It’s a bumper crop today at The Lego Car Blog! Previous bloggee de-marco has been very busy of late, building a plethora of 5-wide Town-style vehicles.

Ranging from beautifully constructed classic pick-up trucks above, through a Humvee, an airport luggage tug, and even a Baywatch-esque coastguard vehicle (allowing us to get Pamela Anderson into the tags), de-marco’s small-scale creations are wonderfully life-like replicas of their real-world counterparts. 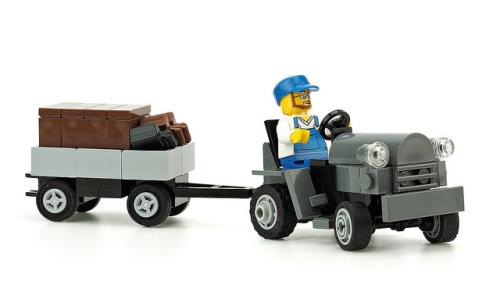 You can view each of the 5-wide models featured here, plus lots more besides, courtesy of de-marco’s Flickr photostream. We’ll get you started with the Lada Niva pictured at the top of this post, which is our favourite – but then we’re a bit weird like that. Choose your own via the link above!