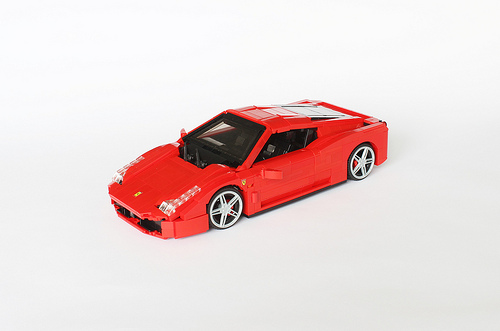 This might just be the cleanest-looking creation we’ll post all year. It is of course a Ferrari 458 Italia, recreated perfectly in Model Team form by Flickr’s Lennart C, and there’s more to see of his exquisitely presented model at the link.

Built by previous bloggee Jeroen Ottens it’s a commission piece in 1:10 scale, and not only does it look fantastic, it’s packed with working technical features too.

Independent suspension on all wheels, working steering with Ackerman geometry, a mid-mounted V8 piston engine connected to a functioning sequential gearbox, opening doors, hood and trunk, and the 458 Spider’s party-piece folding hardtop roof are all present.

Jeroen’s has photographed his Ferrari 458 Spider superbly and it’s available to view on both Flickr and at the Eurobricks forum – take a look via the links above. 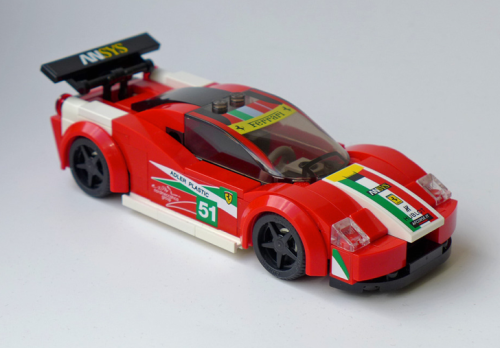 LEGO’s Speed Champions series has been warmly received by the online community and we’re starting to see some excellent additions to LEGO’s original line-up. This is one of our favourites, ER0L’s lovely Ferrari 458 Italia. You can see more of the mini-figure scale Ferrari here, and if you’d like to get started building your own Lego cars the Speed Champions series is a great place to begin – and you may even get to see your creation blogged! 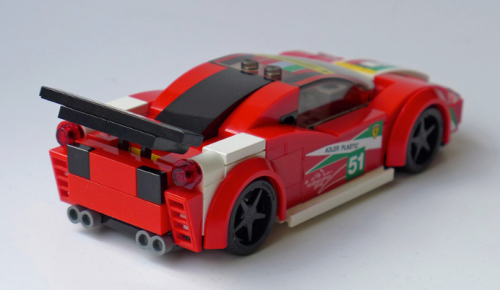 Cor, check out this topless Italian model with her enhanced body! Now that we’ve messed with the search engines, here’s 1saac W‘s Liberty Walk Ferrari 458, hot on the heels of the larger version by Aaden H featured earlier in the week. This one was suggested by a reader, and you can see more on Flickr. 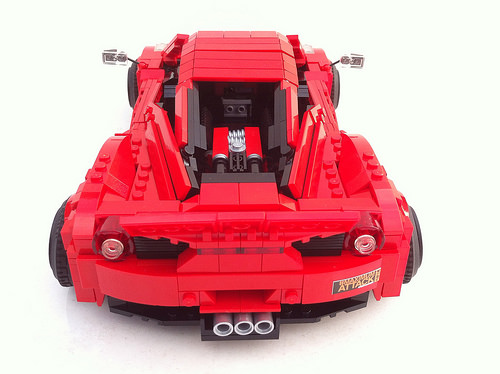 As a rule staff at The Lego Car Blog do not like exotic ‘tuning’ companies. Catering for the rich but utterly tasteless (of which there is burgeoning population world-wide), they modify vehicles that took $billions to painstakingly develop over many many years, but which can apparently be improved with stick-on carbon fibre and some new badges.

However, last year there was one exception to the rule – the utterly gorgeous Ferrari 458 Italia by Liberty Walk. Flickr’s Aaden Hughes thought so too, and he’s recreated the remarkable car from our favourite plastic blocks.

Unfortunately though, for every car like Liberty Walk’s 458 there are at least ten like this, this or this. And they all seem to be German. If you win the lottery, you know what not to do! 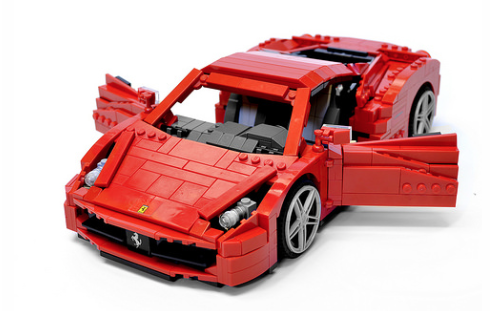 If we’re honest here at TLCB Towers we’re an egotistical bunch. We like to think these posts are about the creation pictured, but really we’re here to satisfy our craving for attention. The Elves on the other hand are just here for the food and an occasional screening of a Transformers DVD.

However this post really is all about the MOC, because this Ferrari 458 Italia might just be the most beautifully designed, built and photographed creation that we’ll post all year. Nathanael L aka Lego Builder Jr. is the brains (and hands) behind the build, and you can see more of his enchanting re-creation of Maranello’s finest at either Flickr or MOCpages via the links above. 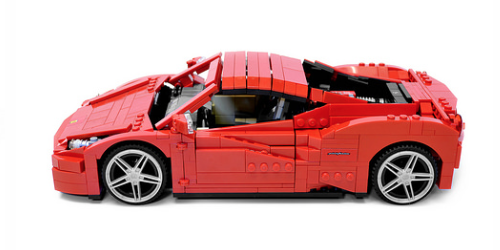 Nathanael’s model is also available on LEGO’s ‘Ideas’ website (formally ‘Cuusoo’), whereby 10,000 votes could see it reach production as an official LEGO set. We’re not sure if the (brilliant) roof would pass LEGO’s set-suitability criteria, but it’d be a small concession to replace it with a more orthodox design. LEGO already partner with Ferrari to produce officially licensed products, so Nathanael’s model really could be a possibility. To vote for the 458 simply click on the ‘Lego Builder Jr.’ link above where Nathanael explains all. 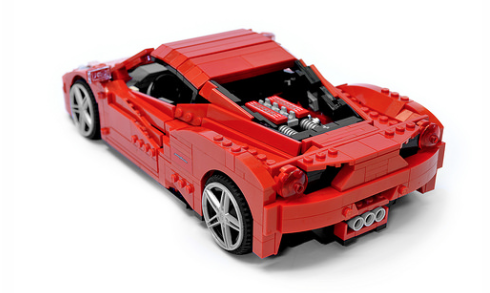 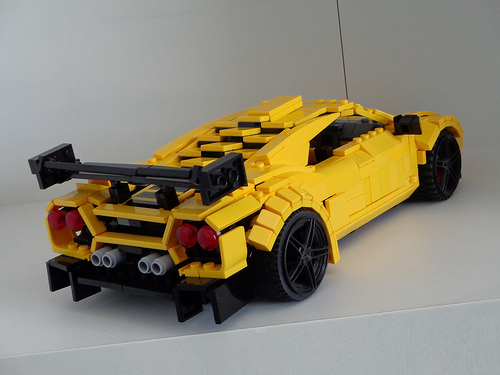 Here at The Lego Car Blog we post a huge variety of creations from the several different sources to where our Elves have been sent. But that doesn’t stop a few builders featuring here every other week it seems!

Senator Chinchilla is one of them, producing stunning vehicles at lightning speed. This week’s is a recreation of the ‘Factory R190 GT’ from the classic video game ‘Burnout Revenge’. See all the pictures on Flickr here, by which time he’ll probably have built something new. 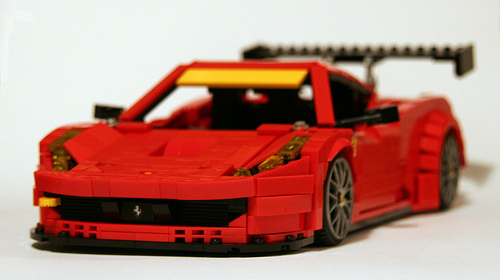 After interviewing Jens M (one half of the due LegoExotics) last week, we saw a teaser picture of his latest project, and here it is finished.

The model is unmistakably a Ferrari 458 Italia GT3. Pure Italian, pure quality, pure LegoExotics. If you’d like to see more pictures of this breathtakingly good Ferrari, go check out the gallery on Flickr. 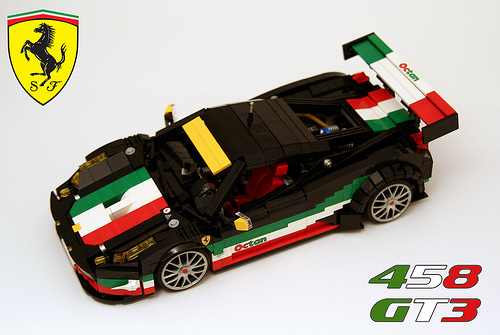 Octan, LEGO’s fictional oil company since 1992, has seen a huge range of vehicles adorned with its livery over the years. From F1 cars to power boats, the list of sets and MOCs to include the iconic red and green colours is almost endless. None though, have looked as superb as this.

Built by TLCB’s current Master MOCers ‘LegoExotics’ (aka Sven B and Jens M) have recreated the mighty Ferrari 458 Italia GT3 race car in incredible detail. And then they’ve added the livery of the greatest fictional oil company ever. So right does their creation look that it would probably convince anyone outside of the Lego Community that it’s a copy of a genuinely sponsored racing car.

The result is that we have a new favourite car of the 2013, and LegoExotics are now perhaps the best active Model Team vehicle builders anywhere in the world.

To see all the photos of their magnificent Ferrari 458 head over to LegoExotic’s photostream, and to read their Lego story in The Lego Car Blog’s ‘Master MOCers’ series, including a sneak preview of what they’re building next, click here to be redirected to their interview. 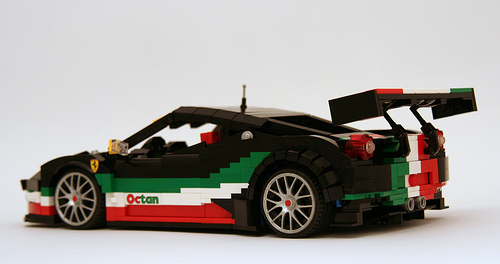 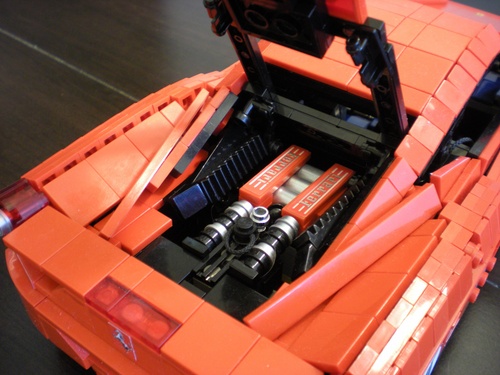 If you like this bit, you should see the rest of it!

Not a Porsche, or a truck – Ferrari’s nicest car for a very long time… 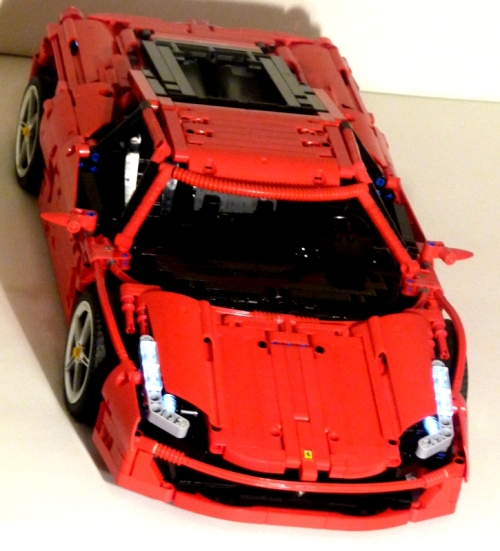 BrunoJJ on Brickshelf recently uploaded this glorious Technic Ferrari 458. Hidden deep within is a full Power Functions remote control chassis. View a brief video on YouTube. Imagine how happy your hamster  would be at the wheel of this!