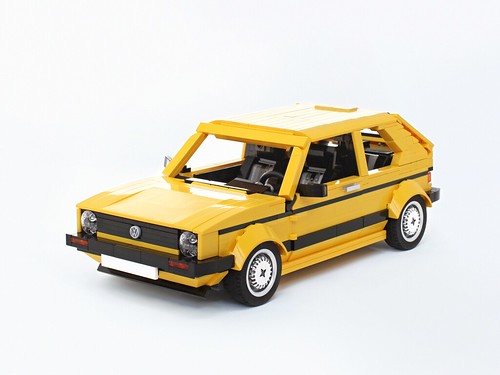 Whilst in the U.S the answer to every car based question seems to be ‘Miata’ (and rightly so), in Europe it seems to be ‘Golf’. Well, it used to be – now it might be more ‘bland crossover SUV’ – but there are about fifteen Golf-based versions of those so in a way the answer is still ‘Golf’.

It’s mostly decades of clever marketing as the Golf isn’t really any better than a myriad of other hatchbacks, but somehow it’s still the default choice.

Back in the mid-’70s though, the Golf really was way ahead of the competition, thanks to sharp styling by Giorgetto Giugiaro, front-wheel-drive, and the fact that it didn’t fall apart like every other car of the era.

This near-perfect Model Team replica of the Volkswagen Golf Mark 1 comes from Serge S who has captured the classic hatchback brilliantly. There’s a realistic interior and engine bay, opening hood, doors and boot, and there are even instructions available too. Click the link above to get to the default answer c1976. 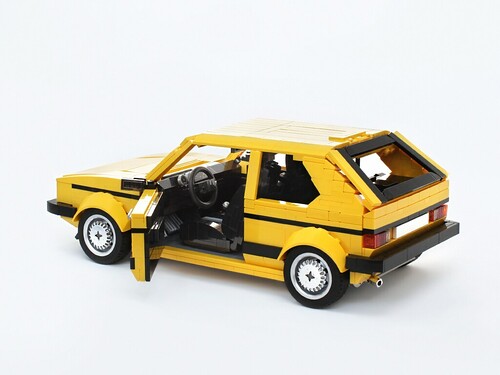 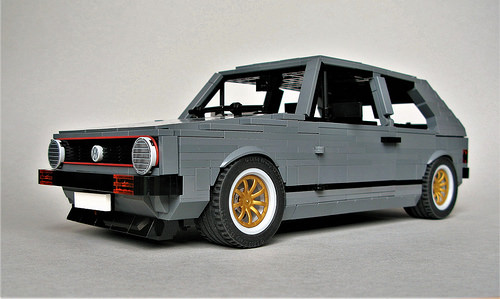 ’80s cars are funny things. Worthless since about 1995, and without either the classic looks found before the ’70s or the rust-proofing of modern cars, they occupy of sort of automotive no-mans-land. This means that of probably any era of motoring, ’80s cars are the most endangered. If you think a McLaren F1 is rare try finding a Talbot Tagora. In our home nation there is just one example of his humble saloon left taxed on the roads. One. 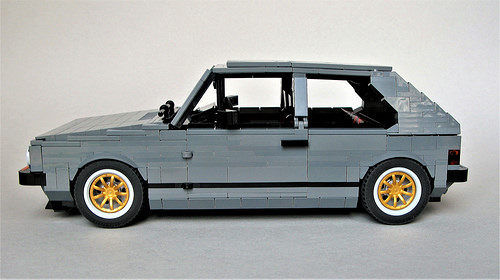 Thankfully there are a few more Mark 1 Golf GTIs left, but even these went through a near extinction phase. Fortunately Volkswagen’s original hot hatch is now rather sought-after and with so many scrapped in the 1990s and 2000s the surviving examples are rocketing in value, safeguarding the model’s existence. This lovely Model Team example of the an early ’80s Mark 1 GTI comes from Joe Perez (previously Mortal Swordsman) of Flickr, and it reminds us of why the original is such a well-regarded car. 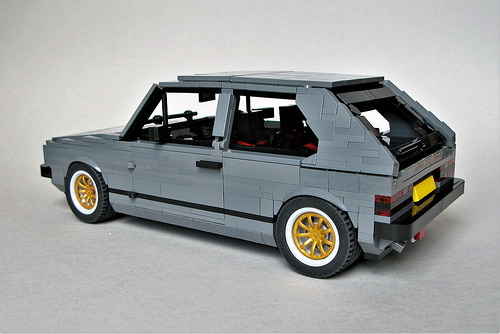 Beautifully clean lines (penned by Giorgetto Giugiaro), lightweight, and with just enough power to have fun, the original Golf GTI is the perfect antidote to today’s heavy, over-styled and ludicrously powerful yet un-involving hot hatches. Joe’s Model Team replica of the definitive ’80s hot hatch captures the iconic look brilliantly and we think it would make a rather good official set (LEGO have a license agreement with Volkswagen after all). There’s more to see of Joe’s 1980s Volkswagen Golf GTI at his photostream – click the link above and badger him to put it on LEGO Ideas. 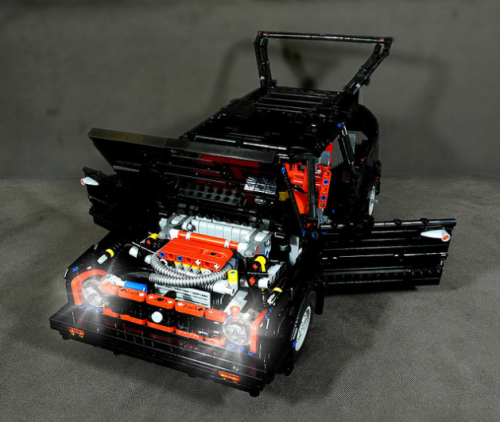 Launched in 1976, two years after the Golf first went on sale, the GTI was the product of a few VW engineers having some fun. In a very German way of course, as having some fun meant staying on late at work.

Still, the product of their inventiveness helped to re-write the rules of quick cars. Powered by a fuel-injected 1.6, and then 1.8 litre engine, the Mark 1 Golf GTI was quicker than the contemporary sports cars of the time, it could fit four people in it, and it didn’t leak when it rained.

Now a seriously sought after car, there sadly aren’t many Mark 1 Golf GTIs left, but if you’d like one Damian Plesniak may have the answer.

There are loads more images to see at Damian’s Flickr and Brickshelf albums, and you can read more about the build, as well as watch a video of the Golf GTI in action, at the Eurobricks discussion forum. 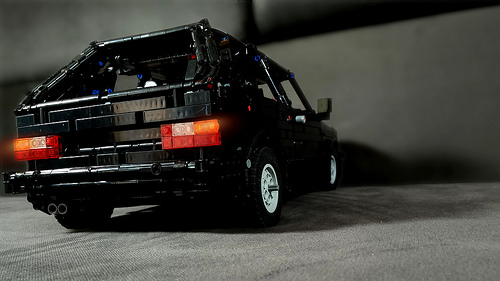 You don’t need to be the first to do something to receive the credit of invention. Apple have been hugely successful by refining other companies’ ideas and marketing them to the masses, and so too it was with Volkswagen and the hot hatch.

Widely credited with creating the formula, Volkswagen’s Golf GTI was not the first sporty hatchback, but it was the best, and as such is now synonymous with the genre. This neat Creator-style recreation of the iconic car is the work of Hasan Kabalak and there’s more to see on Flickr and Eurobricks.

A Bunny Rabbit… With Spiky Teeth

Volkswagen’s Golf GTI (or ‘Rabbit’ in the ‘States) was not the first hot hatchback. For that you need to go back a few years to the Chrysler/Talbot/Simca/Lotus Sunbeam (car manufacturer takeovers in ’70s were very complicated!). However it was the first to popularise the formula, and in doing so it nearly killed off the traditional sports car – at least until Mazda reinvigorated it a decade and a half later.

Launched in 1975 and powered by a fuel injected 1.6 litre engine with 110bhp, and later a 1.8 with a little more, the GTI was more than a match for the traditional sports cars of the day. And you could get five people on board. And they wouldn’t get wet if it rained.

This brilliant little Lego version of the iconic classic hot hatch is the work of serial bloggee Ralph Savelsberg aka Mad Physicist, and there’s more to see at his photostream on Flickr via the link above. 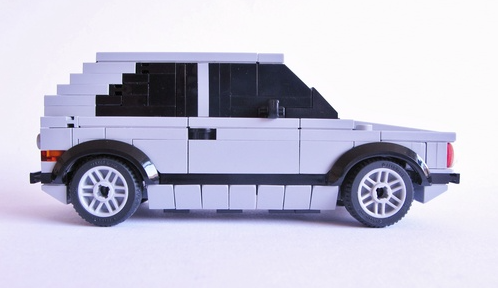 It’s mid-winter here at TLCB Towers, and whilst those from warmer climes are probably picturing piles fluffy white snow, the reality is at the moment everything is an unremitting sea of Grey.

So in recognition of the boring palette at work outside, here are two decidedly grey Lego creations*. First up is MortalSwordman’s brilliant little Volkswagen Golf GTI. The design of the first generation of Wolfsburg’s ‘Peoples’ Hatchback’ was so successful it is still defining the styling direction of the entire Volkswagen range today. You can see more of MortalSwordman’s near-perfect Lego recreation of the Mark 1 GTI on MOCpages here. 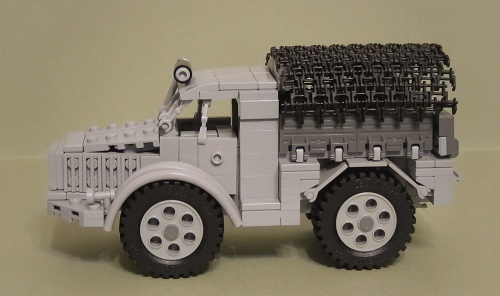 Today’s second grey creation was suggested to us by a reader. It comes from Brickshelf’s myszomor, and it’s a World War 2 Skoda RSO truck.

Skoda built the RSO under force from the occupying Nazi’s, who wanted it for their war effort. Luckily the RSO had a few design flaws that were never rectified, so the truck wasn’t as useful as the Nazi’s wanted it to be. Good. You can see more of myszomor’s intriguing Town-style version of the wartime Skoda on Brickshelf via the link above.

*Smarties don’t come in grey for today’s successful Elf, so one of the office staff sucked a red one until the colour had come off… 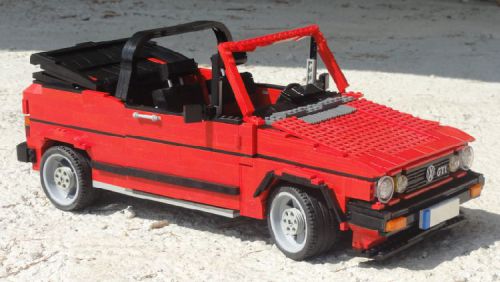 Volkswagen’s Golf GTI is in its seventh generation now, and to date three of these iterations have spawned slightly strange looking convertible versions. This is the very first, the Mark 1 Golf Cabriolet, lovingly nick-named the ‘picnic basket’ due to its rather ugly roll-over hoop. Still, it stopped your head coming off in a crash, which was quite a novel concept three decades ago.

Newcomer REGIS Michel is the builder behind this chunky Model Team re-creation of the ’80s icon, and you can see more of his topless model on MOCpages here.