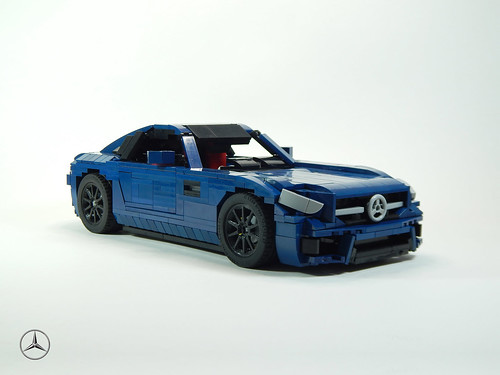 Mercedes-Benz might make some brilliant cars, but their naming policy is madness. We’re not sure if Germans play ‘Scrabble’, but we suspect the naming department at Mercedes do, as their cars seem to be whatever letters Klaus pulled out of the Scrabble bag that day. A, B, C, E, S, GLA, GLB, GLC, GLE, EQC, CLA, CLS, SL, SLC, and lastly AMG GT. And that’s not including all the past combinations of letters Mercedes-Benz have recently dropped in a (failed) attempt to make their range less complicated than the large hadron collider.

This is one of brand’s more sporting collection of letters; the AMG GT, a name so anonymous we’d forgotten it existed at all. Built by previous bloggee Alexander Paschoaletto this Model Team replica of Mercedes-Benz’s V8 sports car captures the look of the real thing superbly, and includes opening doors, hood and trunk too. There’s more of Alexander’s excellent creation to see at his ‘AMG GT’ album on Flickr – click the link above and try to get a triple world score. 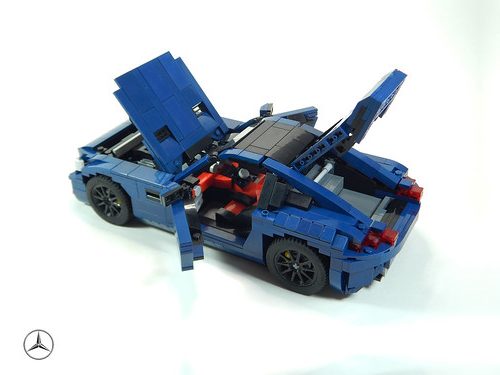 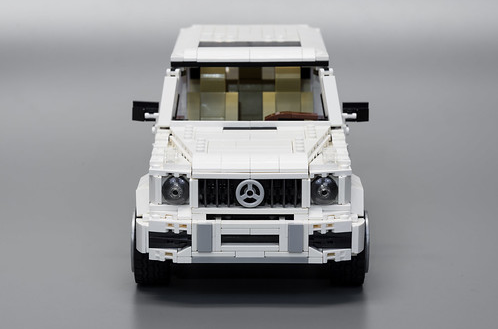 Is there a car we hate more than the Mercedes-Benz G63 AMG? Ok, maybe the Audi SQ7. Or the Hummer H2. No… no, with think this takes it. We hate it on a cellular level. From its stupid bodykit to its stupid wheels via its stupid interior, we hate it. 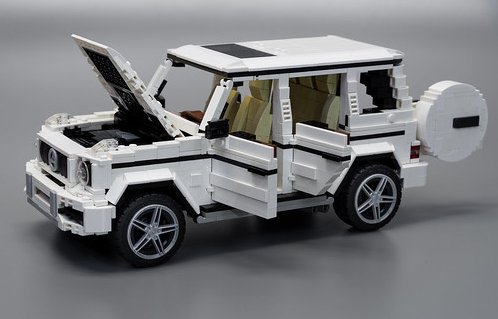 That said, this Lego recreation of the G63 AMG by Flickr’s Noah_L is awesome. Recreated with incredible attention to detail, Noah’s stunning model perfectly replicates Mercedes-Benz’s most ludicrous SUV, from its stupid bodykit to its stupid wheels via its stupid interior. 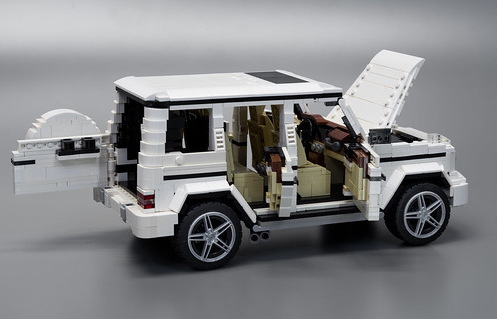 There’s more to see of Noah’s genuinely phenomenal build, including a link to building instructions, at his ‘Mercedes-AMG G63‘ album – join us there where we’ll be simultaneously viewing the images in awe and hating it. 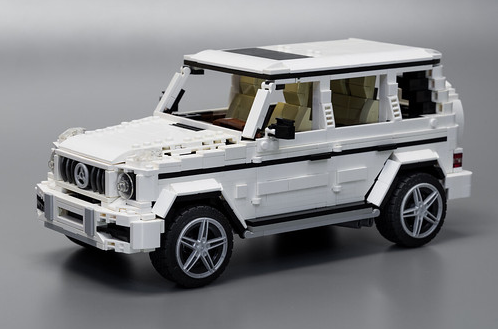 We’re back! After a few days eating chocolate eggs and drinking beer TLCB Team are back in the office. The Elves, left to their own devices for a few days, are pretty hungry, and we have a back-log of vehicles to publish.

We’ll start with this, a rare small-scale post because… well, we knew what it was from the moment we saw it, which is no mean feat at this scale.

This superbly recreated Mercedes-Benz AMG GT3, complete with a monster high downforce aero kit, is the work of previous bloggee RGB900, and alongside this racing Mercedes he’s built several other well-known supercars in Speed Champions style. You can see more of them and the AMG at his photostream via the link above.

Without doubt Aston Martin make some of the most beautiful cars in the world. The problem for the company’s revenue stream is that because they’ve made beautiful cars for a while, you don’t actually need to buy a new one to feel like you’re owning a bit of the Aston Martin experience. This, clearly, doesn’t help them to sell new cars.

Cue the new DB11 (we have no idea where the DB10 went), which updates their design philosophy and, more importantly, utilises a new partnership with Mercedes-Benz AMG to sort out reliability, ergonomics, emissions, and other such finicky issues that Aston Martin really don’t care for.

Cue also Flickr’s Jeroen Ottens, who has constructed this wonderful Technic Supercar replica of Aston Martin’s latest model. Jeroen has captured the tricky new shape beautifully, and he’s also packed his DB11 recreation with accurate technical details too, including independent suspension, a V12 engine linked to an 8-speed sequential paddle-shift gearbox, a working airbrake, LED lights (the front of which swivel with the working steering), and opening doors, hood and trunk.

There’s more to see and a link to instructions at Jeroen’s Flickr photostream – click the link to make the jump and check it out. 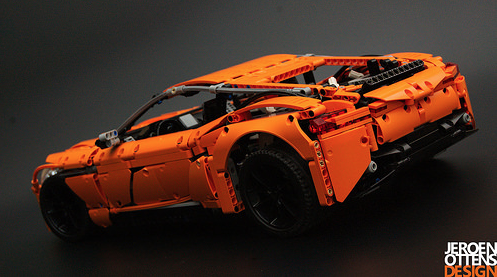 My Other Car is a Mercedes-Benz…

This stunning Mercedes-Benz AMG C63 DTM racing car was discovered on Eurobricks, and it’s one of the most original Technic Supercars we’ve published in ages. Underneath the brilliant bodywork, complete with wonderfully authentic decals, is a wealth of superb mechanical engineering, including a paddle-shift operated 4-speed gearbox, a miniaturised working V8 engine, independent suspension on all wheels, and working steering. 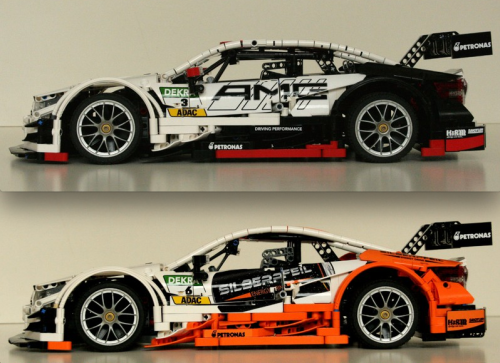 Builder Brunojj1 hasn’t stopped there though as he’s constructed a matching AMG C63, replacing the mechanical goodies with a Power Functions remote control drivetrain and LED lights. Drive is delivered by a combination of an XL Motor and an L Motor, geared to match one another, with a Servo powering the steering. There’s loads more to see of both models, including a of each, at the Eurobricks discussion forum. Click the link above to join the race. 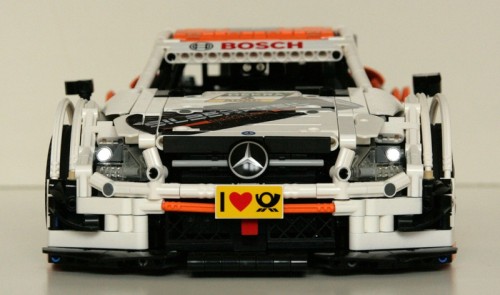 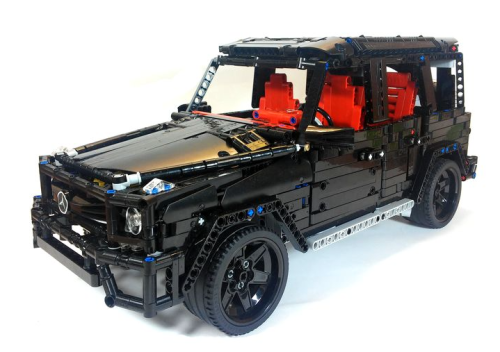 Alongside civilian versions of the Hummer, AMG’s G63 version of the Mercedes-Benz G-Wagon is surely one of the most pointless vehicles ever created. Transforming a hardcore off-road workhorse into an immensely powerful on-road racer results in a car that can do neither of those things, and that costs a fortune to do absolutely nothing well at all. In short, the G63 AMG’s only purpose is to be a rolling pile of banknotes proclaiming the wealth of the occupant inside it. Rant over, on to the model…

This impressive recreation of the World’s Most Pointless Car comes from previous bloggee damianple, making his fifth appearance on TLCB. Damian’s G63 AMG is a fully functioning Technic Supercar with some seriously impressive engineering inside. A working V8 engine, all-wheel-suspension, all-wheel-drive, steering and Power Functions remote control are included, amongst a host of other features.

There’s an extensive gallery of photos available to view via Brickshelf, including detailed chassis imagery and interior shots. Click the link above to make the jump. 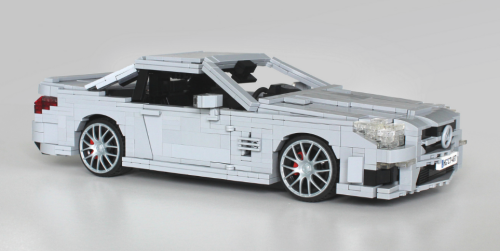 Mercedes-Benz’s SL63 AMG is a bit brash for our tastes here at TLCB, but it’s got one hell of an engine. The latest iteration of Mercedes’ long-standing range-topper makes over 500bhp from its bi-turbo V8, and it isn’t even the most powerful version available (that honour belongs to the SL65, with a turbocharged V12 making over 600bhp). This excellent Model Team recreation of the mighty Merc comes from previous bloggee Lennart C, and you can see more of his Model Team recreation of the SL63 AMG on Flickr at the link above. 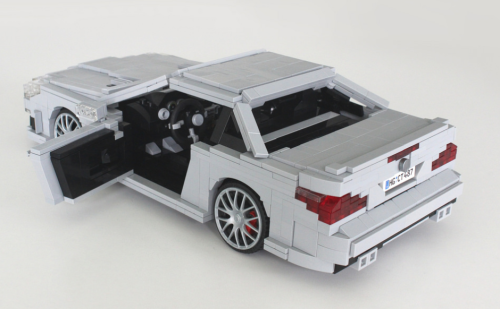 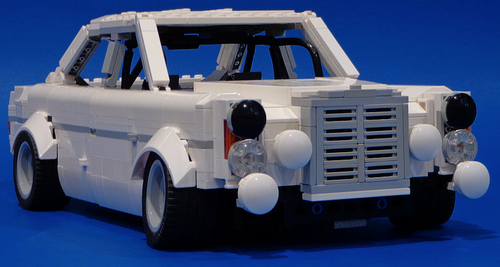 What better way to celebrate tonight’s German triumph in the 2014 Brazil World Cup here at TLCB than with the most German of cars; the Mercedes-Benz AMG*! This particular car is the one that started it all, the awesome 6.8 litre V8 SEL.

TLCB favourite and frequent bloggee Senator Chinchilla is the builder behind this Model Team classic AMG racer, and he’s uploaded a superb gallery showcasing his latest creation to Flickr. Join the German celebration and check it out here!

*We’re very relieved that Argentina were runners up. We had no idea what to post if they’d won.