A footballer with a drinking problem, a guy in every pub in the Midlands, and a Soviet truck maker. GAZ (Gorkovsky Avtomobilny Zavod) have produced vehicles for almost 90 years, mostly (as with everything in the times of the Soviet Union) for the military. These days they also produce vehicles for Volkswagen, Chevrolet, and others under license, but it’s their military trucks they remain most known for, like this excellent mini-figure GAZ-66 built by Flickr’s de-marco. Clever techniques abound and there’s more to see of de-marco’s truck at his photostream – click the link above to check it out.

We’ll let Russian readers insert their own joke linking to the title so we don’t get poisoned by Novichok. Or we can make one about what fetish your Dad’s internet history reveals… Nope, we’re going to rise above it today* – on the the model!

This gorgeous GAZ-53 dump truck is the work of previous bloggee Samolot, who has created this beautiful fully-functioning Technic replica of the Soviet medium duty truck produced from 1961 right up until 1993.

Samolot’s model looks superb (particularly in the wonderful outdoor shot above), and features a long list of engineering ingenuity, including working front and rear suspension, remote control drive via a single XL Motor, steering via a Servo, a remote control four-speed gearbox, and a Medium motor-powered functioning tipper.

There’s much more to see of Samolot’s brilliant build at the Eurobricks discussion forum by clicking here, where you can also find a video demonstrating the GAZ’s working functions.

Wrong Side of the Tracks

Even for Soviet Russia, this vehicle is weird. This is a BWSM 80, which sounds perilously close to something your Mom would be into, but was in fact a prototype Soviet design that fused a GAZ 53 truck with a DT 75 bulldozer to create… whatever the hell this is.

In normal use the BWSM 80 operated as per a regular truck, albeit one with a track system suspended between the wheels. However in extreme conditions the BWSM could lower the track system thus raising its wheels off the ground, and thereby becoming a skid-steer tracked vehicle in the process. If, as we were, you’re struggling to figure that out, take a look at the video below!

That video, and the creation within it, comes from previous bloggee (and apparent Technic wizard) Samolot of Eurobricks, who has recreated the Russian prototype in brilliantly-functional remote control Technic form.

Two Power Functions L Motors drive both the wheels and the tracks, with some ingenious decoupling mechanism we’re struggling to fathom dividing the power appropriately between the two. A Medium Motor drives the lifting mechanism to deploy the tracks, which also feature suspension, and there are LED headlights up front too.

There’s much more of Samolot’s wonderfully odd creation to see at the Eurobricks discussion forum via the link above, or you could just watch that amazing video again!

Today’s post is a car that we’d never heard of, despite more than 300,000 being produced over nearly forty years and it being sold in over one hundred countries. Back to school for TLCB Team…

This is the ARO 24-Series, a Romanian 4×4 launched in 1969 and sold, after many revisions, right up until 2006 when the company finally folded in rather weird circumstances.

ARO began by building a relicensed version of the Soviet GAZ-69 military 4×4 in the late-1950s before designing their own vehicles such as the 24. The 24-Series was a huge export success; over 90% of production was exported before 1989, with the model also built in Portugal and Italy.

After thirty-five years of production the Romanian government decided to sell ARO to an American businessman who planned to import the 24-Series to the US. He managed to convince 200 dealers to pay $75,000 each for franchise rights, and then pressured them to send more money for vehicles. The dealers refused insisting they pay on delivery, and the venture collapsed.

The Romanian government then learned that the buyer had sold the tooling and assets, and that the documents used to purchase ARO were falsified. They sued in 2006 and the import company fired all its employees, sold its headquarters and disappeared. It was a strange ending to a rather good car, one that was an unusual communist success story killed by capitalist greed.

Today’s creation depicts a second generation 24-Series and has been superbly built by previous bloggee Pixel Fox of Flickr. There’s more to see of his excellent Romanian 4×4 by clicking here, and you can discover his ever-expanding back-catalogue of brilliant mini-figure scale off-roaders by visiting the full album here.

Russia’s recent presidential elections once more provided an emphatic win for Vladimir Putin. Securing his fourth consecutive term in office with a huge 77% of the vote, Putin defied the odds, a constitution which limits consecutive terms to two, accusations of voting irregularities, and the assassination and imprisonment of the other candidates. A thoroughly deserved win then!

The run-up to the election which delivered Putin’s decisive victory was also assisted by a thorough and active police force, ensuring the the Russian people were safe and secure to cast their all-important vote. Many vehicles were deployed to this end, but our favourite is this, the GAZ Tigr SPM-2.

With 7mm armour plating, a four foot wading depth, and powered by a 5.9 litre Cummins diesel engine, the GAZ Tigr is the perfect vehicle for Russia’s armed forces to traverse their country’s vast and varied landscape. It’s also large enough to hold a number of police officers plus any citizens that are as yet unsure of whom to vote for. 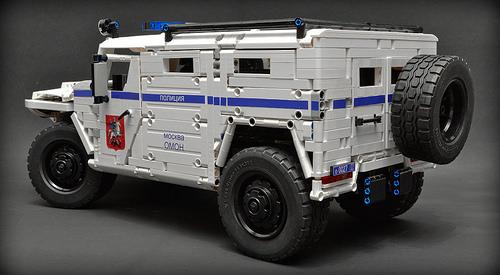 There’s lots more to see of filsawgood’s hugely impressive GAZ Tigr SPM-2 at both Flickr and the Eurobricks discussion forum – take a look via the links above and remember to show your support for the President in the comments.

But It’s All Right Now, In Fact It’s a GAZ

This Thunderbirds-looking thing is actually a GAZ 3351, a real all-terrain transport vehicle with its roots in the Soviet Union. Well, this one’s made of LEGO, but you could buy a real one if you wanted to.

Which is what we suspect the Elves, if they had any money or concept of money, would do – such was the joy (and carnage) amongst them when this powered into the office this morning. 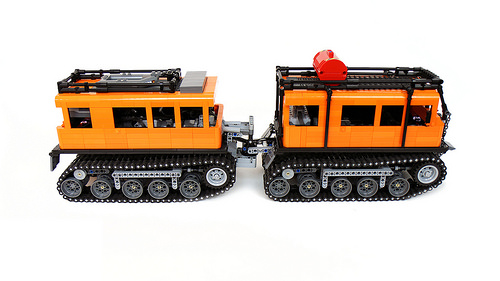 Driven by an XL Motor inside each section and steered via a linear actuator powered articulated pivot, Sariel‘s GAZ 3351 can go almost anywhere, and over almost anything – TLCB Elves included.

The four tracks providing this go-anywhere, smush-anything ability are suspended via oscillating bogies, and are constructed from 560 individual rubber axle-joiners.

This gives the GAZ incredible traction, but the design wasn’t without its teething problems, which you can watch in Sariel’s excellent development and demonstration video below. There are more images to see of Sariel’s GAZ 3351 at his photostream too – click here to take a look. 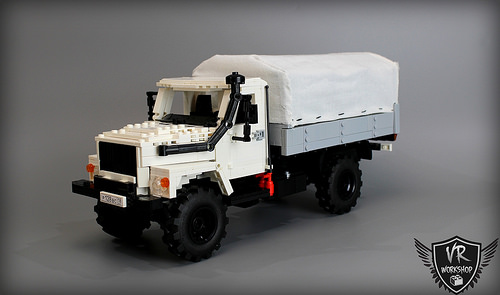 This awesome-looking GAZ-66 is the work of newcomer VovaRychkov. Here at TLCB we have a well documented dislike of terrible Soviet vehicles, but we’re getting along with this one rather well. It’s mostly LEGO save for a few choice accessories and it looks the business. There’s more to see at Vova’s Flickr photostream – click the link above to make the jump. 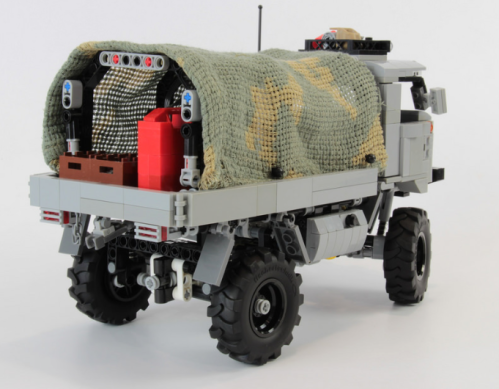 The penthouse offices of The Lego Car Blog were the scene of yet another riot this morning. The Elves who found this GAZ-66 truck by Kirill Simerzin were expecting to be rewarded with handfuls of green Smarties. Unfortunately for them, they hadn’t spotted that this Russian 4×4 vehicle hasn’t actually been built in real bricks. Neither had we, until we read the description. This MOC has been built in the online Mecabricks app and then rendered to a very high standard indeed. Other builders are getting increasingly impressive results with the new Bluerender package. However, the Elves will still prefer models made from real bricks for the moment, otherwise the Smarties and meal tokens will be a bit thin on the ground.

Today, like every pub in Birmingham, TLCB has three Garys present. These beautifully built Technic GAZ 51 trucks – in dropside, tipper and crane flavours – were discovered on Eurobricks. They’ve been built by newcomer super-jaschka and each one features a range of Technic functionality.

Our favourite is this one, the crane truck, which features a working engine, steering, stabilisers, lifting boom, winch, crane rotation and opening doors and bonnet. There’s more to see of all three of super-jaschka’s GAZ 51 trucks at the Eurobricks forum – click on the link in the text above to join the discussion.

It might sound like the Match.com identity of a guy in a pub in the midlands*, but the Gaz 67 is actually a rugged little off-road vehicle that was originally developed for the Russian military. Which explains the ‘Z’ in the name, as the Soviets seemed to name everything with a Z (‘cos Z’s sound cool), and also why it was a bit rubbish. [Maks] mini-figure scale Gaz is anything but rubbish though, and you can see more of his ace little creation on Flickr at the link.

*Apologies to our non-British readers, who probably have no idea what we’re talking about.