This is not a car. But nor is it a lunar rover. We think. We’re not quite sure when a rover isn’t a rover, but we suspect this isn’t. Maybe. What it is, accordingly to builder Brick Ninja, is a ‘Doves of War’ artillery truck, complete with a ‘Big Peaceful Gun’. Which sounds a lot like it’s been named by the NRA’s marketing department. Unlike the NRA though, it is awesome, with some spectacular building techniques used almost everywhere you look. Join the fight for peace at Brick Ninja’s ‘Artillery Truck’ album by clicking here.

Communism, that bastion of equality and shared ownership, did away with such frivolities as freedom of movement, choice of employment, and creativity. In fact we’re pretty sure that creativity and inventiveness were actively banned, so mind-numbingly dull are all communistical product names.

This gives us a headache when we blog one of them, as there is zero chance of getting the vehicle name into a witty title. So – absent from the post title – here is today’s; the KamAZ-4310 military off-road truck, complete with a ZU-23-2 anti-aircraft auto-cannon mounted in the bed. 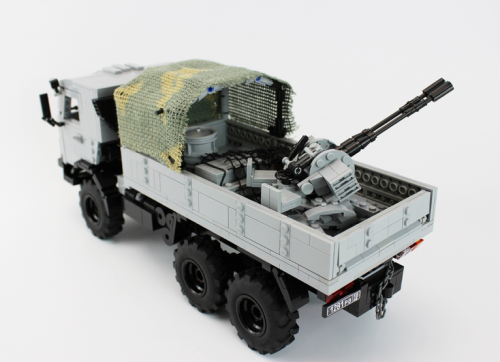 Built by the Soviets from the 1960s, the ZU-23-2 is still in production today, and is probably being used by both sides in the ongoing Syrian conflict which shows little sign of abating. Capable of hitting aircraft from 2.5km, or armoured vehicles from around 2km, it’s the perfect weapon for a dark Christmas night… just think of all the presents that you could make off with if you had this combo! It’s kind of a one-time deal though, as Santa probably wouldn’t be around next year for a repeat robbery.

Vova Rychkov is the builder and there’s more to see at his Flickr photostream – click the link to get armed.

TLCB staff have no imagination whatsoever. Like, at all. This is why we blog nice, neat, real-world cars, and also why we have no clue about anything science fictiony. The inside of captainsmog‘s head then, is somewhere that would probably leave us quietly rocking in a corner. Thankfully the captain can navigate the strangeness of his own mind rather skilfully, and the resultant produce – such as the creation appearing here – can be utterly beautiful.

This whimsical contraption is a Mobile Mechanised Tesla Cannon (apparently), and it is – as you can see – completely wonderful in every way. The mini-figure at the controls looks like he’s having a riotously good time too. We don’t know what it’s for, or how it came to be, but we do know it’s worth a closer look. Join us inside the captain’s head at his Flickr photostream via the link above. 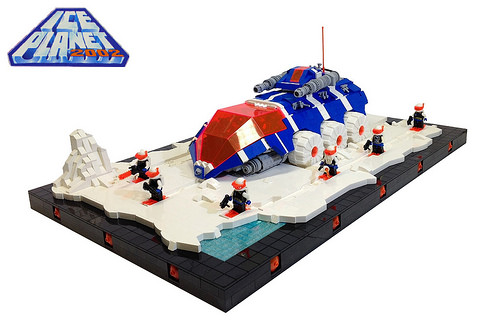 Things seem to be getting serious on Ice Planet. Back in ’93 and ’94 – the two short years that Ice Planet featured in the LEGO range – its citizens were a peaceful, inventive and scientific race. Nerds if you will, quietly making satellites and inexplicably eking out an existence on the frozen wastes of planet Krypto.

Unfortunately their work was regularly disrupted by the evil empire of Blacktron, and later by the thieving robots of Spyrius, the bullying locker-room jocks of space.

Being nerds, the mini-figures of Ice Planet simply had to take it and – possessing no tools of defence or retaliation of their own – tattle to the Space Police in the hope that something would be done.

When the theme was quietly dropped in 1995 we assumed that the will of Ice Planet had finally been crushed by the repeated wedgies and swirlies distributed by its tougher rivals, but it appears we were wrong. Those nerds went underground, they hit the gym hard, and now they’re back for revenge!

This monster Ice Planet Battle Tank, created by markus19840420 (there must be a lot of ‘Markuses’ on Flickr) has finally given Ice Planet the means for a fight back. They’ve waited 20 years for this moment and Spyrius won’t know what hit it!

You can see more of the new, considerably meaner, Ice Planet at markus19840420’s photostream – click the link above to watch battle commence. 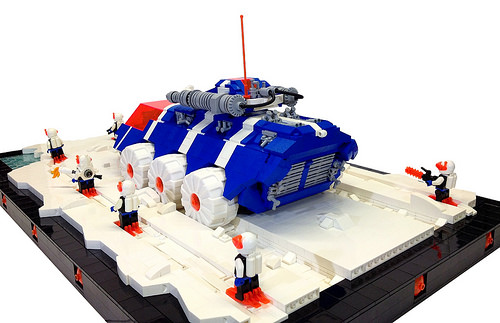 Very occasionally we dip into the news here at TLCB, because, well… we can.

TLCB office can sometimes be a violent place. Elven brutality is a relatively common occurrence, and we – TLCB staff – have been known to glorify violence in our posts.

But – however jokingly we refer to the aforementioned violence – our workforce is formed of fictional mythical creatures, so in reality TLCB Towers are as safe as your front room.

However, unlike many of you reading this, we’re also safe when we step outside, because there are no guns at all on the streets where we’re based. None. And you know what… people don’t get shot.

You can do something about the latest mass shooting in America. An Amendment is just that, an amendment, and thus it can be changed. Whether you’re for or against gun controls, use  your vote.

Mr. Airhorn had been slumbering peacefully for quite some time here at TLCB Towers. Not today though, as a TLCB Elf was having probably the greatest day of its life.

This remarkable Technic creation is the work of previous bloggee Desert752 Krill, and – as you might be able to tell from the picture above – it’s no ordinary coach. The object protruding from the luggage hold is a remotely operated machine gun. And that’s just the start.

The opposite side features an arm-mounted circular saw, there are deployable tyre spikes, and it features a working anti-aircraft gun and front and rear mounted missiles. Plus the usual RC steering and drive of course. All in all it’s the perfect vehicle for a megalomaniacal paranoid dictator, or – in the case of today’s office carnage – an ecstatic TLCB Elf. It’s a shame it hasn’t been entered into TLCB Summer Building Contest as we don’t think anything will come close in the violence scoring category.

The only way to really see the entirety of the engineering insanity within this model is by video, and fortunately Desert752 has produced a brilliant one to accompany his build. Check it out below, and you can see all the photos and the full specifications of this ridiculous vehicle on MOCpages at the link above. 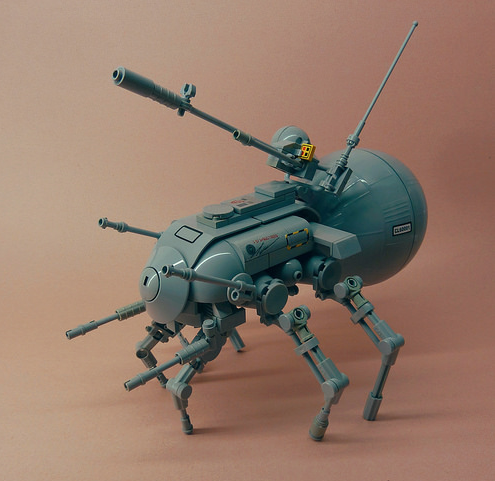 OK, we have literally no idea what this is for or what it does, but we do quite like it. David Steeves is the builder and there’s more to see of whatever it is here. 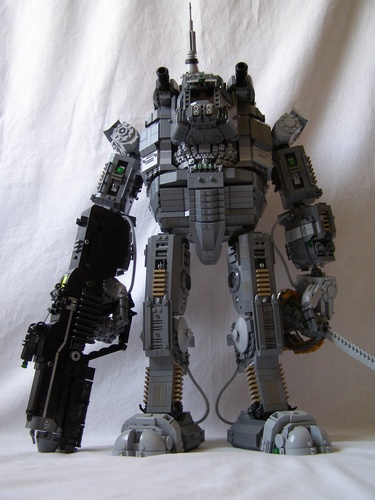 Nice – but what if it had TWO guns!

This is not a car. It’s not a truck, nor a plane, nor a spaceship. But it is sub-zero levels of cool, and it made the Elves stomp around the office, some with lampshades or bins on their heads, brandishing spatulas, tongs and other utensil-based weaponry.

Normally when a MOC stirs up feelings of long-suppressed free-will in the Elves we end up having to diffuse a riot, but today they’re so enamored with their find that they’ve been happily playing Robots all morning. So if you see one chunkily walk past you whilst you’re visiting Eurobricks, MOCpages or some-such site, wearing a bucket on its head and with tissue boxes on its feet, gently point it in the direction of anything vaguely robotic – you’ll make its day.

Oh, we nearly forgot! This ridiculously cool MOC is the work of Mr Elliott Feldman on MOCpages. There’s a full(ish) backstory and  a comprehensive gallery of the component parts. Check it out here.